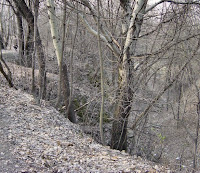 ... 1941 (70 years ago today), began a 2-day massacre of unthinkable proportions. On order of the military governor of Nazi-occupied Kiev, Nazi troops summarily executed nearly 34,000 Jewish persons to a ravine known as Babi Yar (right). (credit for 2004 photo) Others suffered similar fates: it's estimated that in the course of the war 100,000 persons more more -- among them Soviet prisoners of war, Ukrainian nationalists, Roma people -- were killed at Babi Yar. These incidents would result in the conviction and execution of one Einstazgruppen defendant at Nuremberg. The site moved Russian poet Yevgeni Yevtushenko to write a poem that begins:

No monument stands over Babi Yar.
A steep cliff only, like the rudest headstone.
I am afraid.