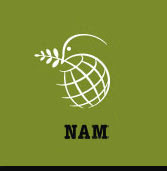 On this day in ...
... 1961 (50 years ago today), the organizational meeting of the Non-Aligned Movement, in Belgrade, Yugoslavia, neared its conclusion. It had been convened by Yugoslav President Josip Broz Tito as, to quote the website of the John F. Kennedy Presidential Library, "a conference for heads of state from independent nations who attempted to remain neutral during the Cold War." Other leaders present, from 25 countries, included Indian Prime Minister Jawaharlal Nehru. Today NAM has 120 members, and "aims to represent the political, economic, and cultural interests of the developing world." (image credit) The position of NAM Secretary-General appears the the moment to be vacant, the person who held the office at this year's onset -- Hosni Mubarak -- having stepped down amid pressures on which we've posted, and now enduring trial in his home country of Egypt.