In a flurry of events, the Philippines has demonstrated full support of the International Criminal Court:

► On August 23, the Philippines' Senate concurred in the May 6 President's May 6 approval of the Rome Statute of the ICC. Preceding the 17-to-1 vote were sponsoring addresses by 2 Senators -- Miriam Defensor-Santiago (below left) (credit), the Chairperson of the Senate Subcommittee on the ICC about whom IntLawGrrls previously posted, and Loren Legarda (top left) (credit), the Chairperson of the Senate Committee on Foreign Relations.
► On Tuesday, Legarda delivered the instrument of ratification at U.N. headquarters in New York. It is set to enter into force on November 1; on that date the Philippines will become the 117th state party to the ICC. 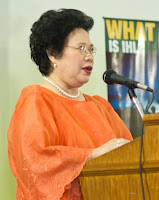 ►By the time of that New York ceremony, the Philippines already had a new ICC judge in mind. On August 26, the government announced that it would nominate Santiago for judicial election at the December session of the Assembly of States Parties. As Beth Van Schaack posted, all candidates named till then had been men, and onlyone had expertise in human rights/humanitarian law, as opposed to criminal law. Santiago's biography manifests her expertise in the former area of law. So too the speech she gave on the day of her nomination, entitled "Some Problems and Approaches in the Relation of National Law and the Rome Statute of the International Criminal Court: Application of International Humanitarian Law."

These shows of support give international criminal justice a new anchor in east Asia -- as the grey expanse in the map at right (credit) demonstrates, a region marked by a dearth of ICC states parties.

Senator Miriam D. Santiago was a brave regional trial court who rejected warrantless arrests and preventive detention orders of Marcos as regional trial court judge. Needless to say she is an expert in her field & that she is fearless and will do the country proud if she wins a seat in the ICC. In as much the Philippine Senate will have no character when she's gone, Her contribution to World Order will be the pride of the Philippines.

If there is one woman who should sit at the International Criminal Court, it is the Philippines' Miriam Defensor Santiago. She won the Asian equivalent of the Nobel Prize for her brave, unwavering moral crusade against criminals in government, graft and corruption. As a former regional trial court judge and the youngest at that, she courageously ruled against curtailment of human rights by then dictator of 20+ years, Ferdinand Marcos, through warrantless arrests, suspension of the writ of habeas corpus, and preventive detention which were the equivalent of death sentences at that time. It was Marcos's way of stifling opposition, human rights, student and political leaders. While other judges cowered with fear, Defensor Santiago was one bright star in the judiciary which later paved the way for her meteoric rise in government. To this day, she seems to be the only regional trial court judge from the Philippines who was featured in the front page of the New York times with this picture : http://www.google.nl/imgres?q=miriam+defensor+santiago+commissioner+of+immigration+and+de&um=1&hl=nl&client=firefox-a&hs=Go9&rls=org.mozilla:en-US:official&noj=1&tbm=isch&tbnid=qfZPlprs7E6RwM:&imgrefurl=http://www.miriam.com.ph/photos2.php&docid=rFeXkP0fzIULXM&w=726&h=896&ei=R2FvToW_EcagOurYkJYJ&zoom=1&iact=rc&dur=245&page=1&tbnh=154&tbnw=124&start=0&ndsp=24&ved=1t:429,r:0,s:0&tx=68&ty=75&biw=1280&bih=858

In a developing country like the Philippines, it is rather suprising to find a breath of fresh air in the brilliant scholar that is Defensor Santiago. You cant easily find someone whose academic and career credentials match only those of the judges in the ICJ and the ICC. She is Asia's brightest star in this ICC race.

Miriam Defensor Santiago, aside from being a brilliant legal scholar, has earned praise from women leaders of the world. She is a well-known champion of gender rights in a developing country. A criminal tribunal without a female candidate running in its slate of candidates for judges is hardly representative of the interests of society. Many crimes affect women - rape as a tool of war, forced pregnancies, slave labor, forced quarters, etc. Defensor Santiago's expertise in international humanitarian law, gender rights, as well as her experience at the UN High Commisioner for Refugees would be significant contributions to the development of international criminal law jurisprudence at The Hague. Besides, the Prosecutor would need a judge to rule on selective charging of key players in war crimes. Having started as assistant to the minister of justice of the Philippines as a young lawyer, she has the experience to see that justice is served and has the track record for the job. Defensor Santiago will be one heck of a brilliant female judge at the ICC. All women, will be proud.