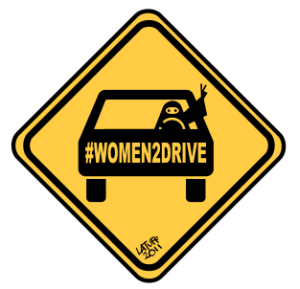 Fast upon the news that "Saudi women to be given right to vote and stand for election in four years," as the Guardian put it, came the news that one Saudi woman has been sentenced to 10 lashes for driving her car, another is on trial and a third faces trial for the same "offense."
The latter efforts have been condemned by Right2Dignity, a Saudi-based organization that appears to be linked to Women2Drive, a group about which we've posted. (image credit)
Right2Dignity states what should be obvious:

This is completely unacceptable and certainly breaks laws and regulations as well as international treaties that Saudi Arabia has signed, such as CEDAW.

The announcement about women's suffrage also deserves a critical eye. It's not just that the promised franchise remains 4 years off -- and came days before an election at which women will not be permitted to vote. Also to be noted is that, despite the "right" language used in much media, official phrasing is rather different. For instance, the website of the Royal Embassy of Saudi Arabia in Washington, D.C., refers to

the announcement of the Custodian of the Two Holy Mosques King Abdullah bin Abdulaziz that Saudi women will be appointed to the Majlis Al-Shoura (consultative council) and will be allowed to participate in future municipal elections.

Terminology like "appointed" and "allowed" bears echo of noblesse (roi?) oblige -- of a deigning to accord something that yet might be taken away. That's a far cry from acknowledgment of a fundamental right.
Here's hoping events in Saudi Arabia move speedily in the direction of genuine rights. Preferably by automobile.