(Delighted to welcome back alumna Ruthann Robson, who contributes this guest post)

Today, the South African Judicial Service Commission publicly interviewed Mogoeng Mogoeng, President Jacob Zuma's choice for Chief Justice of the Constitutional Court (logo at right). (credit)
While the President has broad discretion under the South African Constitution, the choice has provoked a groundswell of opposition.
For example, the important and well-respected organization Section 27, named after Section 27 of the South African Constitution providing for socio-economic rights, has filed a Submission on behalf of itself and several other organizations, specifically objecting to judgments by Mogoeng, a member of the Court since 2009, in the areas of sexual orientation and gender-based violence cases.
The Section 27 submission requests specific queries from the Judicial Service Commission on the matter of sexual orientation, as well as a statement of his commitment to equality on the basis of sexual orientation as explicitly stated in the South 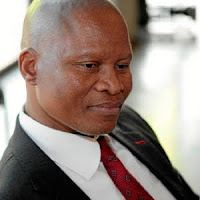 Africa Constitution. The submission notes that Mogoeng (left) dissented in a sexual orientation case without providing reasons as constitutional practice requires. (photo credit)
As for the gender violence issue, the problem is not Mogoeng's silence, but specific troubling statements that the submission outlines. The Section 27 submission concludes:

We have no confidence in his ability either to dispense justice in accordance with the values of the Constitution or in his ability to address the complex gender questions that arise in the judiciary and in the legal profession appropriately. The judgments to which we have referred evidence a patriarchal attitude to women. We have no reason to believe that Justice Mogoeng will not exhibit similar patriarchy in relation to gender transformation in the judiciary, the legal profession and indeed society as a whole.


The Women's Legal Centre, writing on behalf of itself and other organizations and persons, also focuses on the matter of gender-based violence in its Submission, highlighting judgments and statements by Mogoeng, as well as mentioning the matter of sexual orientation.
Both Submissions include a discussion of one of Mogoeng's most controversial judgments. Rendered before he was a member of the Constitutional Court, the judgment eliminated a sentence of jail-time, in favor of a fine, for a man convicted on assault with the intent of doing grievous bodily harm to his "girlfriend." In this previously unreported judgment also discussed by Pierre deVos, the defendant had "‘tied the complainant, his girlfriend, with a wire to the rear bumper of a vehicle. He then drove that vehicle on a gravel road at a fairly high speed over a distance of about 50 metres." Mogoeng found the sentence of two years imprisonment too harsh in part because the man "was provoked by the complainant."
In other cases, Mogoeng reduced or suspended sentences for rape because the parties knew each other.
Cases described by the Southern African Litigation Centre, have prompted the characterization of "shocking" regarding other of Mogoeng's judgments involving sexual assault and violence against women and children. In one, Mogoeng reduces to the miminum the sentence of a man convicted of raping a seven year old girl because her injuries were not "serious."

Several law professors from the United States who have scholarly connections to South Africa, including myself, have signed a letter authored by Penelope Andrews (right), CUNY Law Associate Dean and IntLawGrrls guest/alumna who herself once was a candidate for the Constitutional Court. (photo credit) The letter asks the Judicial Service Commission to seriously consider what would be Mogoeng's role as Chief Justice on the Constitutional Court -- an institution not only important to South Africa's constitutional democracy and transformation, but also internationally.
Today's interview and deliberation -- live-blogged here by deVos, a law professor at the University of Cape Town -- placed the Judicial Service Commission center stage, and are being "described as a test of its character and politics, and, therefore, of its value" in the South African Constitutional democracy.