(Delighted to welcome back alumna Valerie Epps, who contributes this guest post on her paper entitled Civilian Casualties in Modern Warfare: The Death of the Collateral Damage Rule, which she'll be presenting as part of a panel at 9 a.m. this Saturday, October 22, at International Law Weekend in New York) 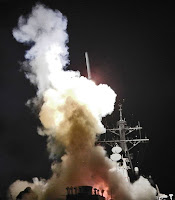 Members of the armed forces are sent off to war to kill enemy combatants. They are not sent to kill civilians.
We permit the “combatant’s privilege” (soldiers being allowed to kill enemy soldiers) in part because we understand that although civilians may be killed or injured in warfare, this will only happen occasionally when such death and injury is “incidental” to a legitimate attack on a military object. (credit for 2011 photo of U.S. Navy attack against Libya) Under the laws of war, civilians may never be targeted.
The collateral damage rule, as set out in Article 51(5)(b) of Protocol Additional I to the 1949 Geneva Conventions on the laws of war, prohibits

'[a]n attack which may be expected to cause incidental loss of civilian life, injury to civilians, damage to civilian objects, or a combination thereof, which would be excessive in relation to the concrete and direct military advantage anticipated.'

The collateral damage rule is meant to give protection to civilians in time of war in contexts where military and civilian targets are interwoven.
The latter statement, reflecting the usual assessment of the collateral damage rule, may simply be a method for tricking us into thinking that ethical military commanders, by following the rule, will, in fact, avoid all but incidental damage to civilians. Nothing could be further from the truth.
The nature of warfare has changed fundamentally over the last two centuries. Once inter-state warfare was a predominate type of armed conflict. Now, by far the most prevalent form of conflict is intra-state, or internal, armed conflict. It currently makes up about 90 percent of all armed conflicts.
At the same time, the ratio of military-to-civilian-war-related deaths has undergone a radical transformation. Stanley B. Greenberg and Robert O. Boorstin wrote in their 2001 article, People On War: Civilians in the Line of Fire:

'[I]n World War I, nine soldiers were killed for every civilian life lost. In today’s wars, it is estimated that ten civilians die for every soldier or fighter killed in battle.'

There is much discussion of the accuracy of various proposed ratios -- 10 to 1, 9 to 1, 8 to 1 -- and considerable debate on who should be counted in both military war-related deaths and civilian war-related deaths. Yet no one doubts that in almost all modern wars, civilian deaths outnumber military deaths often by several multiples. While it is true that intra-state wars are generally far less deadly than international wars, the ratio of civilian to military deaths remains disproportionally weighted to civilian deaths.
It may thus be concluded that the collateral damage rule, whatever its intention, is not fulfilling its purpose of protecting civilians in war time.
What should be done, when we find that a legal rule cannot or does not achieve its purposes?
All law tolerates some level of violations and lack of enforcement, but in this case, the problems go deeper. We sense that the world is not about to adopt a rule of pacifism, although that would be the simplest and most effective method of protecting everyone from the devastations of war. Nor doe we sense that the armed forces will completely draw back from attacking military targets if there is even the slightest chance that civilians could be killed or injured.
So what modest suggestions can be made to assist, in some small way, the fulfillment of the collateral damage rule’s wish to protect civilians?
► First, we need to acknowledge that we have a problem.
Wars are not just killing military personnel with a few civilians being killed incidentally. They are killing more civilians than members of the armed forces.
► Next, we could suggest that commanders in the field have Rules of Engagement that restrict severely the amount of acceptable civilian casualties.

Such an approach has had a dramatic effect in reducing civilian casualties in places like Afghanistan, although the military rank and file often protest such rules. (credit for 2008 Associated Press photo at left, by Alauddin Khan, of funeral of victim of suicide bombing in Kandahar, Afghanistan)
► Above all, we need a mandatory system for recording civilian deaths and injuries in war time. (IntLawGrrls' posts on this issue here.)
Although the Geneva Conventions require the recording of details of military personnel who die, are injured, captured or are missing, the requirements for keeping similar statistics for civilians are much less robust and many states do not keep any such statistics. In September 2011, the Oxford Research Group launched the Charter for the Recognition of Every Casualty of Armed Violence, which sets out the requirements for the recording of every casualty of conflict throughout the world. This is bold and necessary step to begin to bring us closer to protecting civilians in warfare, the goal of the collateral damage rule -- a rule that, at the moment, is more often breached than observed.