And now there are 4.
Vying to become the Prosecutor of the International Criminal Court are 1 woman and 3 men chosen from among the 52 in the initial pool and the 8 who were interviewed. As detailed in this just-released report (see p. 7 and CVs beginning at p. 39), they are: 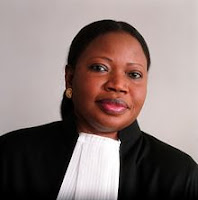 ► Fatou Bensouda of Gambia (left) (prior posts), the ICC's Deputy Prosecutor since 2004, and before that, a prosecutor at the International Criminal Tribunal for Rwanda, and Gambia's Minister of Justice and Solicitor General (photo credit);

► Andrew T. Cayley of Britain (left) (prior posts), since 2009 the International Co-Prosecutor at the Extraordinary Chambers for the Courts of Cambodia, and formerly a defense lawyer at the Special Court for Sierra Leone and the International Criminal Tribunal for the former Yugoslavia, Senior Prosecuting Counsel at the ICC and at the ICTY (photo credit); ► Mohamed Chande Othman (right), since December the Chief Justice of Tanzania and formerly a chief prosecutor at ICTR and a prosecutor in East Timor’s U.N. administration (photo credit); and 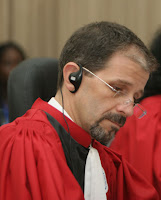 ► Robert Petit of Canada (left) (prior posts), Counsel in the Crimes Against Humanity and the War Crimes Section of Justice Canada who preceded Cayley as the ECCC International Co-Prosecutor (2006-09), and has also served as a prosecutor at ICTR and in the Serious Crimes Unit of the United Nations' East Timor mission, and as a Senior Trial Attorney for the Special Court for Sierra Leone. (photo credit)
Election's set for the December session of the 119-member ICC Assembly of States Parties.
By then, the ICC search committee hopes, there'll be no contest.
The 5-man committee -- a geographically diverse group coordinated by Prince Zeid Ra’ad Zeid Al-Hussein of Jordan and also comprising Baso Sangqu of South Africa, Joel Hernández of Mexico, Daniel Bethlehem of Britain, and Miloš Koterec of Slovakia -- has made clear its desire to put forward a single candidate whom the Assembly will then approve by consensus.
In its effort to attain this goal, the committee continues to extend the formal deadline for nominations; by dint of the 4th and most recent extension, that date is now this Friday, October 28.
Pleased to see a number of prosecutors whom we've come to respect not only on account of their courtroom accomplishments, but also through their participation in events like the annual International Humanitarian Law Dialogs. Looking forward to further developments.