The Convention Against Torture, the Canadian Criminal Code & the Prosecution of George W. Bush

Yesterday, the former President of the United States, George W. Bush, was scheduled to speak in British Columbia, at the Surrey Regional Economic Summit.
Given Bush's presence in Canada—a state party to the Convention Against Torture and Other Cruel, Inhuman or Degrading Treatment or Punishment – many international scholars and human rights advocates alike, including Amnesty International and Human Rights Watch, are asking: Why aren’t Canadian officials indicting him for torture?
Attempts have been made in the national courts of Switzerland, in Germany, in France, and in Spain to hold Mr. Bush and other former top administration officials accountable. Under Article 5(2) of the Convention Against Torture, Canada may be obligated either to submit the case against George W. Bush for the purpose of prosecution or to extradite him to a third country willing to engage in prosecution. But thus far, the Attorney General of Canada has failed to do so.
Is Canada placing politics above the law?
If it is, that may be about to change. 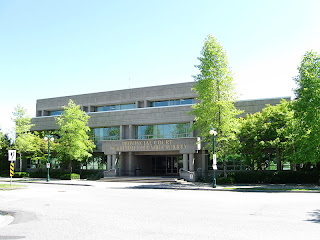 Yesterday, four individuals who allege they were tortured during George W. Bush’s tenure as President of the United States filed to bring a private prosecution against him in Provincial Court in Surrey, British Columbia (right). (photo credit) The four men took this step after repeated calls by human rights organizations to the Canadian Attorney General to open a torture investigation of George Bush went unanswered.
According to the filing, the four men, Hassan bin Attash of Saudi Arabia, Sami el-Hajj of Sudan, Muhammed Khan Tumani of Syria, and Murat Kurnaz, a German-born Turkish citizen, each endured years of inhumane treatment that violated the Convention Against Torture. The horrific and illegal treatment, which they say occurred while in U.S. custody at military bases in Afghanistan or at the detention facility at Guantánamo Bay, included beatings, chainings to cell walls, being hung from walls or ceilings while handcuffed, lack of access to toilets, sleep, food and water-deprivation, exposure to extreme temperatures, sensory overload, and sensory deprivation. Three of the plaintiffs have since been released without ever facing charges. Hassan Bin Attash still remains in detention at Guantánamo Bay, though he too has not been formally charged.
Said former Guantánamo detainee and torture survivor Muhammed Khan Tumani:

'Although I was completely innocent, I lost nearly 10 years of my life. I suffered greatly while detained at Guantánamo, and continue to suffer. I have restrictions on my travel and cannot travel to see my father who is ill. George Bush must face justice and be held accountable for his actions, which continue to cause me and so many harm.'

Over 50 Human rights groups and prominent individuals are signing on in support.
On September 29 and October 14 of this year, the New York-based Center for Constitutional Rights and the Canadian Centre for International Justice, which has offices in Ottawa and Vancouver, made joint requests for the indictment of former President Bush for his role in the authorization and oversight of acts of torture committed pursuant to his administration’s well-documented torture program. The request for indictment was based upon Canada’s obligations under the Convention Against Torture, on Canadian Criminal Code § 269.1, which addresses criminal liability for torture, and on Canadian Supreme Court precedent condemning the acts of torture that took place at Bagram Air Base, secret “black sites,” through extraordinary renditions, and at Guantánamo against detainees in U.S. custody. The legal grounds for liability under the Canadian Criminal Code are based on evidence that Mr. Bush ordered, authorized, condoned, planned or otherwise aided and abetted acts of torture, or, at a minimum, that he failed to prevent or punish subordinates who committed these acts.
CCR and CCIJ delivered over 4,000 pages of exhibits, admissions and evidentiary materials together with joint letters and a 70-page legal brief and draft indictment to Canada's Attorney General, Robert Nicholson. Given the overwhelming documentation, there are reasonable grounds to believe that Mr. Bush is responsible for acts of torture and other cruel, inhuman and degrading-treatment and enforced disappearances, violations that took place during the CIA's secret detention program between 2002 and 2009.

Remarkably, as reported in this Washington Post article, the indictment is also supported by statements made by George W. Bush. His 2010 memoir, Decision Points, describes his role in the creation of the CIA secret detention program and the approval of “enhanced interrogation techniques,” such as waterboarding. Despite Mr. Bush’s arguments about the need for the authorization of waterboarding in the context of the “war on terror,” Article 2(2) of the Convention Against Torture:

'No exceptional circumstances whatsoever, whether a state of war or a threat of war, internal political instability or any other public emergency, may be invoked as a justification of torture.'

The Canadian Federal Court of Appeal and the Canadian Supreme Court have in some ways acknowledged that the Bush regime authorized acts in violation of both the Convention against Torture and § 7 of the Canadian Charter of Rights and Freedoms, if not § 269.1 itself. This occurred with respect to the conditions of detention and interrogation of Omar Khadr, a Canadian citizen detained at Guantánamo. (See paragraph 51 here and paragraph 25 here.) The Canadian Supreme Court also made the following clear, at paragraph 50 of a 2002 decision, Suresh v. Canada (Minister of Citizenship and Immigration): 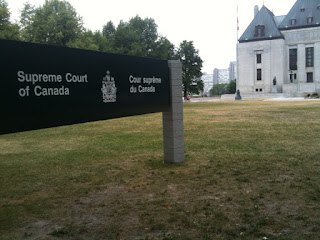 It can be confidently stated that Canadians do not accept torture as fair or compatible with justice. Torture finds no condonation in our Criminal Code; indeed the Code prohibits it (see, for example, s. 269.1). The Canadian people, speaking through their elected representatives, have rejected all forms of state-sanctioned torture. Our courts ensure that confessions cannot be obtained by threats or force.

Several recent Canadian asylum cases found sufficient evidence of command responsibility or membership in an organization responsibilty for acts of torture– not much unlike, and potentially less extreme than, acts apparently authorized by top officials in the Bush Administration.
Despite the overwhelming evidence presented to Canada’s government, Bush administration officials continue to visit the country with impunity.
Similarly, if Mr. Bush were not a former U.S. official authorizing the very same acts, would his fate be different from Mr. Bazargan (Iran, 1996), Mr. Bonilla (Colombia, 2009), Mr. Equizabal (Guatemala, 1994), Mr. Ishaku (Democratic Republic of the Congo, DRC, 2011), Mr. Ryivuze (Burundi, 2007), Mr. Sivakumar (Sri Lanka, 1997), Mr. Syed (Pakistan, 2006) or Mr. Zazai (Afghanistan, 2005)?
Why such selective recognition and enforcement of Canada’s bans against torture and crimes against humanity?
In my view, the Bush Administration’s legacy of torture has tarnished what remains of the reputation the United States maintained as a “beacon” of diplomacy democratic values. Will profitable political business relationships with former political leadership in the United States now sully the reputation of Canada’s judiciary as an independent body working to secure justice, fairness and equity for all?
People around the world need Canada to be a defender of human rights, not a country that conveniently forgets its principles when those accused of authorizing torture happen to be powerful neighbors. Today, with the filing of the first private criminal prosecutions against Mr. George W. Bush for torture, the Canadian judiciary has the chance to prove its mettle to its citizenry and the world.

by Joanna Cuevas Ingram at 5:10 AM