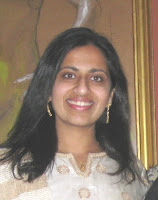 It's IntLawGrrls' great pleasure to welcome Aparna Polavarapu (left) as today's guest blogger.
As a Teaching Fellow with the International Women’s Human Rights Clinic at Georgetown University Law Center, Aparna co-teaches seminar classes on women’s human rights and supervises student work on women’s rights litigation, fact-finding, and law reform advocacy.
She received her B.S. degree from the Massachusetts Institute of Technology, her J.D. degree from Georgetown, and her M.A.L.D. degree from the Fletcher School of Law and Diplomacy at Tufts University. While at The Fletcher School, she taught an undergraduate international law course at Tufts and lectured on international law, rule of law, and gender equality.
Aparna a founding member of the Red Thread Foundation for Women, an organization that awards scholarship funds and mentorship to 3d-culture women entering their 1st year of undergraduate education in the United States
In her guest post below, Aparna discusses her article, “Procuring Meaningful Land Rights for the Women of Rwanda.” Based on her field research in Rwanda, the article recently was published in the Yale Human Rights and Development Law Journal. Her current research examines the characteristics of and interaction between customary law and statutory law, as they relate to land rights and equality.
Aparna dedicates her post to Vasireddy Sita Devi, a Telugu writer and rights activist who died in 2007 at age 73, "for her tenacity and her passion for women's equality and social justice." (photo credit) Aparna writes of her transnational foremother: 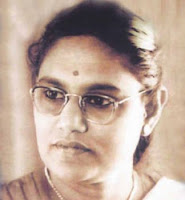 She grew up in a small village in Andhra Pradesh, India, where girls were taken out of school at the age of 10. She defied the system, continuing her studies at home and later leaving home to work and finish her schooling, obtaining not only a B.A. but also an M.A. She later became a well-known writer, drawing attention to the plight of the poor and women. Several of her works were controversial and at least one was banned, although the ban was later lifted.

Sita Devi joins other IntLawGrrls' foremothers in the list just below our "visiting from..." map at right.
Heartfelt welcome!