Justice Delayed? Jean Claude Duvalier and the Case for Prosecution 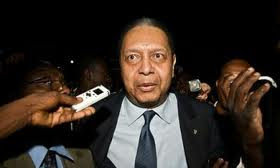 Upon his return from exile in 2010, Jean Claude “Baby Doc” Duvalier (left) was promptly charged for financial and political crimes. (prior post)
Since that time, a team of domestic and international human rights lawyers and advocacy groups have been actively engaged in pushing for prosecution to the fullest extent of the law. International support has come from the Inter-American Commission on Human Rights and the U.N. High Commissioner for Human Rights. Domestically, civil society groups have formed to advocate for victims and to educate Haiti’s youth about the crimes of Duvalier.
However, despite these efforts, many media reports suggest prosecution has stalled, and Duvalier is commonly seen out in Port-au-Prince, dining in restaurants and attending clubs.
Duvalier supporters also interrupted a recent Amnesty International press conference, harassing and intimidating AI advocates who were attempting to peacefully release their report, You Cannot Kill the Truth: The Case Against Jean-Claude Duvalier. The acceptance of such activities and intimidation on the part of Duvalier and his supporters suggest continued impunity and a lack of viable avenues to justice for Duvalier’s victims.
In part, the delay in prosecution is attributable to historical corruption, significant institutional losses from the 2010 earthquake, and long delays in the formation of a government after Haiti’s most recent elections, which left many key ministerial posts vacant. Just this week, however, Haiti’s new government finally took power. Thus comes a unique opportunity to reignite prosecution, ideally silencing fears of interminable delays ensuring an efficient and fair judicial resolution for Duvalier’s victims. 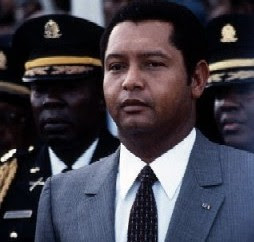 The rule from 1971 to 1986 of Duvalier (historical photo at right) was marked by brutal violations of human rights. Opponents were silenced by either fear or force. Extrajudicial killings, torture, forced exile, and unlawful detention were common, with prisoners often succumbing to malnutrition and disease absent any formal charge. Duvalier’s control was near-absolute: the Constitution made him President for Life, and the legislature—filled with Duvalierists—was effectively under his command. Ultimate control of both military and paramilitary forces—including the violent Tonton Macoutes (commonly known as the “bogeymen”)—was also vested in the President alone.
Justice for these crimes is clearly needed, and the time for prosecution is ripe.
The Inter-American Court of Human Rights has joined other tribunals and international bodies in concluding that crimes against humanity cannot be prescribed by a domestic statute of limitations. In addition, the last century has seen an increased recognition of both the existence of immutable, inherent human rights and the need for criminal liability to redress gross violations of such rights. Since the end of World War II, international law has recognized liability through command responsibility and culpable omission. In short, Duvalier is directly answerable for the crimes of his regime.
Haiti’s prosecution of Duvalier may do more than render justice for his past victims.
It offers a critical opportunity for Haiti to move forward, to denounce its reputation for judicial impunity, and to ensure that future leaders are bound by the rule of law.
It is also fundamental to post-earthquake recovery and future development that Haiti significantly increase the capacity of and trust in its judiciary—necessary in part to sort out the seemingly intractable issues of land rights and inadequate oversight of building codes which contributed heavily to the extent of earthquake destruction.
If Duvalier is allowed to remain in Port-au-Prince absent a full and fair investigation and prosecution his presence will serve as a constant reminder to future leaders that their actions are not bound by the rule of law and to the Haitian citizenry that their rights are not adequately protected.
In contrast, prosecution may prove that Haiti’s judiciary:
To date, more than a dozen individual victims have filed complaints before the Port-au-Prince judge. Institutional and political support to the Haitian judiciary is critical to give voice to these victims, representative of the thousands more suffered under Duvalier’s regime.
The United States is uniquely situated, given its long history in Haiti and stated commitment to human rights abroad, to contribute such support. Further, relevant U.S. Department of State documents, cables, and intelligence reports could be significant in establishing Duvalier’s personal knowledge, and therefore responsibility, for the crimes of his regime. However, to date, the United States has been silent, refusing to encourage Haiti to fulfill its international legal obligations. This silence comes despite the ample experience at high levels of Department of State in both prosecuting crimes against humanity globally, and in working with development issues in Haiti.
France, which harbored Duvalier for over two decades, has also failed to step forward in support of Haiti’s efforts at prosecution.
The silence of these countries, both uniquely involved in Haiti’s history, is particularly telling in contrast to the commitments of support from the Inter-American Commission and the U.N. High Commissioner.
International and domestic advocates, recognizing the critical nature of prosecution, remain committed, actively engaging in legal representation of victims and political advocacy in Haiti and abroad. Despite the real and significant challenges, the formation of a new government and the continued commitment and bravery of Duvalier’s victims to ensuring justice give reason for cautious optimism. These advocates and individuals seek to ensure both justice for past crimes and a better future for all of Haiti, as should we all.