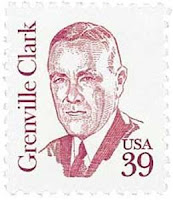 -- One of very few sentences in a terse WikiPedia entry on Grenville Clark (1882-1967), co-author with Louis Sohn of World Peace Through World Law, a 1958 book that argued for far-reaching reform of the United Nations Organization. One suspects the unknown WikiAuthor did not fathom the potential depths of the quoted statement.

Thanks so much -- what a strange typo that was. I amended the principal post to include the proper title of the book.