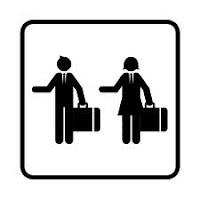 Women, it’s time to get a sponsor.

--Author/consultant Selena Rezvani (below right). (image credit; photo credit) The quote appears in her CNN.com story that parses one path by which women may find success in the business world. Women, Rezvani writes, must find not just a "mentor," a term she reserves for "the friendly guides who dispense helpful information, offering up input and advice to mentees," but rather a "sponsor," one of those people who "are defined by their organizational clout and ability to open doors," who "will personally advocate for a cause, project or promotion on

a protégé’s behalf." He is, in short, a mentor with clout. In Rezvani's telling, the sponsor is almost always a "he." Her assertion about who-has-the-clout, often still true in many sectors, leads Rezvani to comments about the sponsor-sponsee relationship that may raise an eyebrow or 2.