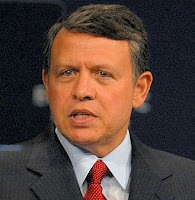 The Arab Spring didn’t start because of politics; it started because of economics – poverty and unemployment. You cannot move political reform without economic reform.

– Jordan's King Abdullah II (right) in a Slate interview with Lally Weymouth. Prompting the king's comments was a question about Jordan's responses to ferment in Muslim and Arab world. (credit for 2008 photo) A noteworthy albeit reportedly "fragile" response was last week's appointment of an International Court of Justice Judge, Awn Shawkat al-Khasawneh, as Jordan's new Prime Minister. Also worth noting in the Slate article were: the king's prediction that Libya faces a difficult transition; his comments that "nobody has an answer to Syria"; his statement that "everybody is wary of dealing with the West" because of the speed with which Western countries "turned their backs on" Egypt's Hosni Mubarak; and his assessment that the Arab Spring "is a disaster" for Israel.

Of course economic downturn is the main reason for revolt. Give one a Ferrari, swimming pool and twelve virgins and now one cares about the right to vote. But when there is no food and there is an asshole in power, people will revolt.

By the way, I thought that Al-Khasawneh was only an ICJ judge, no ICC.

Thanks for the correction about the judge's court. I have made the change in the main text.