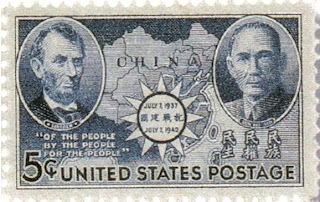 ... 1911 (100 years ago today), in what was called the Wuch'ang Uprising, troops led by Dr. Sun Yat-Sen succeeding in overturning China's Ch'ing government. The event, which came to be known as "Double Ten Day," would lead, after the ouster of China's last emperor, to the establishment of the Republic of China. Well after Sun's death in 1925, the Nationalist government he founded would help to fight against Japanese occupation during World War II. The Nationalists, then led by Chiang Kai-Shek, would flee the mainland in 1949. (See prior posts here, here, and here.) (credit for photo of WWII-era U.S. stamp likening Sun to Abraham Lincoln)