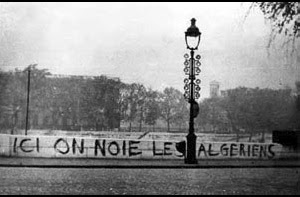 ... 1961 (50 years ago today), tens of thousands of women, children, and men of Algerian ancestry demonstrated in the streets of Paris. Violence erupted, and in the end, hundreds of Algerians were dead,some of them thrown into the River Seine. (photo credit) Commanding police in what's known today as the Massacre du 17 octobre was Prefect Maurice Papon -- a former Nazi collaborator who in subsequent decades would be convicted of crimes against humanity for his involvement in an atrocity during the World War II Vichy era. This commentary by a University of Houston professor criticizes the apparent decision of the Sarkozy administration to ignore this half-century anniversary; this post calls for commemorations, and this blog includes some.