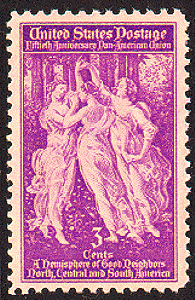 On this day in ...
... 1889, began la Primera Conferencia Panamericana / First Pan-American Conference, an initiative of the United States, which aimed to increase trade with countries in Latin America. Delegates met in Washington, then toured U.S. industrial sites. All Western Hemisphere governments attended the conference, which lasted through mid-April 1890 and resulted in the establishment of the organization that would prove a forerunner to the Pan-American Union. And as described here, that development led to the fantastical 1940 postage stamp at right.