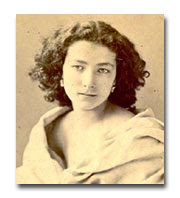 On this day in ...
...1844 (or, by some accounts, 1845 -- did she shave a year off her age?), a girl, named Henriette Rosine Bernhard,was born in Paris to a Dutch mother; her father is unknown. By age 20 she'd been a student at the Comédie-Française, the mistress of a Belgian prince, and a courtesan. By age 25, having assumed the stage name Sarah Bernhardt, she was an actor of great acclaim, in Europe and North America alike. (credit for portrait by Félix Nadar) She played an array of roles, from Cleopatra to Hamlet to St. Theresa. Her prominence earned her the title "The Divine Sarah." She would become one of the earliest film stars, making eight movies in all before her death in 1923. Below is a video clip depicting her in the title role of Queen Elizabeth (1912).