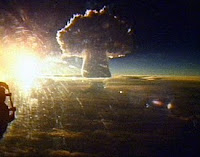 On this day in ...
... 1961 (50 years ago today), global voices joined in condemnation of the Soviet Union's explosion, in the Arctic, of "the world's largest ever nuclear device." At the the bomb was believed to be 50 megatons, equivalent to 50 million tons of dynamite. (credit for photo of the explosion on this day of what was called the "Tsar Bomb") According to the BBC,

It was subsequently revealed the Soviet bomb was 58 megatons -- the world's biggest explosion to date and nearly 4,000 times more powerful than the atomic bomb dropped on Hiroshima in 1945.


Emblematic of the arms-race mentality of the time, U.S. officials said they'd "known for many years how to make 50 and 100-megaton bombs but remain[ed] convinced that smaller weapons are more effective."