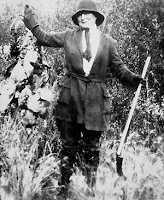 On this day in ...
... 1957, in Whitehorse in the Yukon Territory, Canada, Martha Louise Black (right) died at age 91. (photo credit) Born Martha Louise Munger on February 24, 1866 in Chicago, in 1898, pregnant with her 3d child and abandoned by her husband, she crossed the Chilkoot Pass and settled in the community of Dawson with her brother. Together they were miners. Eventually she married again, this time to a man who became the Commissioner of the Yukon Territory. She and he went to England during World War I; " there she received an OBE for her aid to Yukon servicemen and became a fellow of the Royal Geographical Society for her work with Yukon flora." After her husband fell ill, 70-year-old Black won election to Parliament, the 1st woman from Northern Canada and the 2d woman ever to sit in the House of Commons. There she served for five years until her husband recovered and reclaimed his seat.