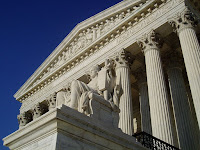 ... 1987, the Judiciary Committee of the U.S. Senate voted 9-5 against the Supreme Court nomination of Robert H. Bork, who'd been a Judge on the U.S. Court of Appeals for the District of Columbia Circuit since 1982, and before that, a Yale Law professor, Solicitor General, and Acting Attorney General. Bork was known as a proponent of originalism. By it federal judges, as unelected officials with life tenure, are urged to exercise restraint by adhering to the original understanding -- that is, the posited understanding of the framing era -- of constitutional provisions. This position called into question Court precedents involving, for instance, abortion and the rights of the accused. Advised to withdraw after the vote on this day, Bork would refuse and instead take part in a combative hearing before the full Senate, which, by a vote of 58 to 42, would reject his nomination on October 23. (credit for photo of Supreme Court building) The rancor produced by this instance of what came to be called "borking" infects federal judicial nominations to this day.