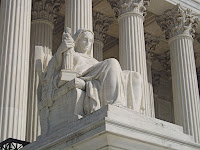 Once again it's the 1st Monday in October -- the day that the U.S. Supreme Court opens its October Term 2011. (photo credit)
Issues in cases to be argued include Medicaid regulations, sex-offender registration, religious freedom, assistance of counsel after conviction, and suspicionless strip searches. A global copyright case set for Tuesday presents a question intriguing to international lawyers:

Does Section 514 of the Uruguay Round Agreements Act violate the First Amendment of the United States Constitution?

That's just this week.
By Term's end, probably the last week of June 2012, we'll have a good idea of each party's nominees to run for President and Vice President in November. By then the Court may have decided a number of cases sure to push buttons among the electorate. Many of these potential judgments would concern issues of rights -- and thus would constitute evidence of state practice of interest to international lawyers no less than to American voters.
Examples (drawn from this report from Robert Barnes of the Washington Post), as well as this SCOTUSblog roundup of pending cert. petitions) of issues that the Court has been or is likely to be asked to review this Term:
► Does the Constitution allow all provisions of the 2010 federal health-care overhaul -- a statute that's the product in part of a "health is a human right" plank in the 2008 Democratic platform?
► Are all provisions constitutional in the tough state immigration law passed by Arizona (prior IntLawGrrls posts available here) -- a law since copied by other states?
► Can a state bar unmarried opposite- or same-sex couples from adopting children or serving as foster parents?
► Can a corporation be sued, in U.S. courts pursuant to the Alien Tort Statute, for torts in violation of the law of nations? (Petitions for certiorari in Bowoto v. Chevron and Kiobel v. Royal Dutch Petroleum Co., cases we've tracked in prior posts available here, were to have been considered by the Court on Friday.)
► May a state extend, beyond a 3-mile territorial-water limit, its environmental requirement that foreign- and U.S.-flagged ships use low-polluting fuels?
► What is the proper way to litigate survivors' claims for Nazi-looted art now in museum collections? (Grosz v. Museum of Modern Art, on which we've posted here and here, also was on Friday's Conference docket.)
OT '11, as insiders will call it, well may prove to be one for the books.

The Court's orders list (http://www.supremecourt.gov/orders/courtorders/100311zor.pdf) issued today deals with 2 of the matters discussed above:
In the antipollution / territorial-waters case, Pacific Merchant Shipping v. Goldstene, the Court invited the Solicitor General to brief the views of the United States on the matter. It will decided whether to grant the cert. petition after receiving the SG's brief.
Cert. was denied in the looted-art case, Grosz v. MoMa.