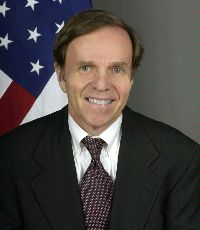 I had occasion to hear Michael Posner (left)—the Assistant Secretary of State for Democracy, Human Rights & Labor—speak this week. He was in the Bay Area for a conference with business leaders on the internet and human rights. The Center on Democracy, Development & The Rule of Law at Stanford University (my sabbatical home a couple of years back) was a co-host, along with Stanford-in-Government. CDDRL tweeted Posner's talk.
Posner gave a short talk on the Obama Administration’s approach to human rights and then took questions for about an hour. In his prepared remarks, he emphasized that the goal is always to ensure that human rights are raised at the highest level, even with countries with whom our relationship is fraught. He discussed the way in which the U.S. has engaged with civil society in preparing our Universal Periodic Review for the Human Rights Council, which he described as a still “flawed” body. He also discussed the priority of promoting internet freedom to create a common global platform for innovation, education, and political dissent and ensuring that activists understand the risks of using the internet in terms of threats to privacy.
During the Q & A, he offered these frank responses to questions from the audience:
1. In response to a question about the propriety of adopting a rights-based approach to international development, he stressed that all human rights are indivisible, but that we need to approach them in different ways. He stressed the importance maintaining accountability for international aid, ensuring that recipients have a stake in development programs, and prioritizing democracy-building institutions and not just infrastructure projects. He emphasized the need to focus on the NGO sector, where we get “more bang for our buck,” and to develop and apply better metrics to determine if our efforts are effective. In particular, he emphasized the United States’ support for Lifeline, the fund for embattled NGOs.
2. In response to my question about the United States’ position on the amenability of corporations to suit under the Alien Tort Statute (i.e., Kiobel), Posner (not surprisingly) declined to reveal the position the government would take in its brief, which is due in January. He stressed, however, that the U.S. government is not monolithic and that the process of gathering inter-agency views is underway and that “lively discussions” are occurring to map out the Administration’s position.
3. When asked about the treaty ratification process, he was pessimistic about the ability to get outstanding treaties ratified given the state of our Senate and its Foreign Relations Committee. Even the Convention on the Rights of Persons with Disabilities, which he described as being based on the Americans with Disabilities Act, is a non-starter at the moment. He noted that the problem stems from the lack of a domestic constituency for such initiatives, coupled with hostility from Tea Partiers and others to international engagement.
4. When asked about the role of government in encouraging pro-human rights policies within multinational corporations, he stressed three initiatives.
5. He described as “agonizing” the situation in Somalia, especially in 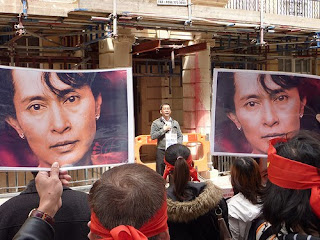 light of the fact that aid was delayed for lack of a reliable local partner. He analogized Al Shabaab’s control over food aid to that of the Government of Sudan, which in the Kordofan region is using food as a weapon. He also predicted that Syrian President Bashir al-Assad would step down eventually, and described efforts to get the Arab League to weigh in.
6. Posner is en route to Burma. He declined to give details about his agenda there, but stressed the following observations:

He noted that the U.S. government supports in principle the Bali Democracy Forum, but that ASEAN should not be fooled into thinking Burma is on the road to democracy.