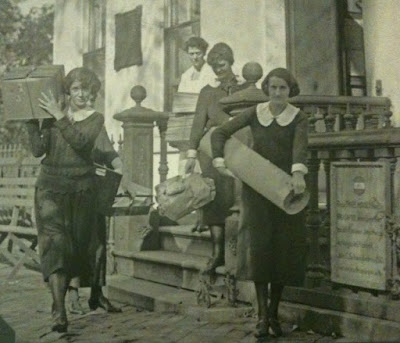 Yes, it's true: the U.S. Supreme Court evicted a group of women from their home.
But the news is a bit old.
Just back from a visit to D.C. to attend the unveiling of the portrait of my former boss, Justice John Paul Stevens, soon to be on public display on the ground floor of the Court. The photo above, already on display at the Court, caught my eye. It was made at Trumbull's Row, an amalgamation of row houses that during the Civil War had served as a prison, and in early days as a home for Congress.
The National Woman's Party had called Trumbull's Row home since 1921. Then, however, the government decided to place the Court's own home -- the 1st the Court would have outside the Senate wing of the Capitol -- on the site.
The women fought condemnation, unsuccessfully; thus the moving day depicted in the Library of Congress above. On March 16, 1929, National Woman's Party leaders Burnita Shelton Matthews, who'd go on to become the 1st woman U.S. District Judge, and Maud Younger, long active in labor as well as suffrage campaigns, accepted a payment of nearly $300,000. It was, according to a plaque near the photo, "the largest award to any single property owner." The party used the money to buy another house nearby; today that later home is a museum and education center.