Earlier this year, the Army issued a revised personnel regulation with far-reaching consequences.
In this August 4 revision, Army Regulation 601-210, the Army announced that persons who are dual citizens, of the United States and another country, are not permitted to enlist, in the Army, Army Reserve, or Army National Guard, for jobs that require a security clearance – “unless they already possess a security clearance.” The regulation is important because it potentially bars millions of Americans from most Army jobs: The vast majority of Army jobs require a security clearance –including officer appointments, Special Forces, Military Intelligence, and Military Police jobs, but also most others.
Dual citizenship is something that millions of Americans possess, often inadvertently, but other times because dual citizenship allows them to travel more freely, or live and work easily in other countries.
Whether a person holds citizenship in a particular country is a matter of that country’s law, not of U.S. law. One’s citizenship is thus not always within the control either of the individual or of the United States government.
Although some countries allow their citizens to expatriate, others do not. Some people are dual citizens because their parents or grandparents hold citizenship in a foreign country; others are dual citizens because they were born in another country. The U.S. Office of Personnel Management has published Citizenship Laws of the World (2001), a document that explains the wide variety of rules regarding citizenship. Although this document is not completely up-to-date (some countries have changed their laws since it was published), it can give a reader a good idea of the potential problems posed by the Army’s personnel regulation.
According to OPM, for example, the country of Iran considers the children of male Iranian citizens to be Iranian citizens as well, and prevents them from renouncing Iranian citizenship – so any U.S.-born child of an Iranian citizen is necessarily a dual citizen of the United States and Iran, and can’t rid himself of Iranian citizenship. Should the U.S. Army bar a young American of Iranian descent from serving in the U.S. Army Special Forces, merely because his father is an Iranian immigrant to the United States? One would hope not.
Even where a person has voluntarily sought to acquire more than one citizenship, barring the person from enlisting in Army jobs that require security clearances makes little sense.
There isn't any evidence that dual citizens are any less trustworthy than other Americans – naturalized or native-born – who hold only one citizenship. A person who is a citizen of the United States and no other country – like the infamous Robert Philip Hanssen, who sold American national security secrets to Russia – can be a security threat if he has foreign ties or vulnerabilities or simply the disposition to betray his country.
Whether a person who possesses dual citizenship is a threat to U.S. national security or should be denied a security clearance requires a fact-based, individualized determination; George Washington held more than one citizenship, but his French citizenship was no threat to the United States, as France was a key ally of the United States and helped to secure American independence.
The Army’s regulation preventing all dual U.S. citizens from enlisting in most Army jobs is a much broader bar than the military has previously applied.
Previously, dual citizenship did not prevent enlistment into any job and did not automatically bar a person from holding a security clearance. Instead, security officials would evaluate each person’s case individually and look at a variety of factors when determining whether someone's dual citizenship posed a problem. 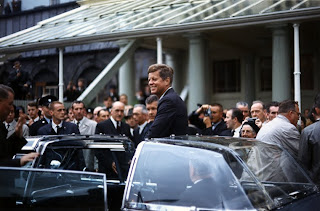 Ironically, famous Americans, such as President John F. Kennedy (right), Army General and Joint Chiefs of Staff Chairman John Shalikashvili, U.S. Sen. Marco Rubio (R-Florida), and even President Barack Obama, would likely have been barred from serving in most Army jobs had they attempted to join the U.S. Army at a time when the new Army regulation was in effect. (credit for June 27, 1963, photo of President Kennedy on ancestral visit to Ireland)
The rule barring dual citizens from enlisting in most jobs also cedes American sovereignty to other countries, because it lets foreign countries control who can serve in the US Army. As discussed above, a foreign country – not the United States – determines who is a citizen of that country. When a foreign country determines that an American holds its citizenship, that American necessarily is a dual citizen of that country and the United States. Barring these dual citizens from enlisting thus lets foreign countries use their citizenship laws to control which Americans can serve in the United States Army.
Allowing foreign laws to control who gets to enlist in the U.S. Army is clearly not in America’s national security interest. Let’s hope that Army leaders reconsider their new rule at the first opportunity.