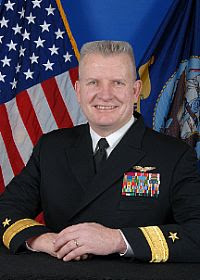 Several important issues are brewing for consideration at next week's arraignment of Abd Al-Ramin Hussain Mohammed Al-Nashiri on Guantanamo. (See our prior coverage here).

For one: Defense lawyers and personal representatives of a number of detainees (including several military officers) have now accused the U.S. of monitoring their unclassified communications with their clients in violation of the attorney-client privilege. Given the inaccessibility of the island, mail is the principal means of communication between the detainees and their legal reps. The policy apparently came from Rear Admiral David Woods (above left), the new (since August) commander of GTMO.
Nine of these lawyers, who represent six "high-value" detainees including al-Nashiri, have sent a letter to William K. Lietzau (below right), Deputy Assistant Secretary of Defense for Rule of Law and Detainee Policy. Nashiri's lawyer, Navy Lt. Cmdr. Stephen Reyes, has also filed a still-classified motion to this effect before the Commission. The letter states that: 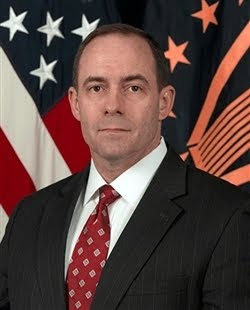 The current JTF [Joint Task Force] monitoring and policy is illegal and violates the attorney-client privilege.  It undermines any notion of "fairness, transparency and justice." The review and censorship of legal materials will effectively grind litigation to a halt  by barring legally requested attorney-client communications. ... As a direct result of "the policy] counsel are in the untenable position of having either to violate professional ethical standards in order to communicate with our clients, or cease communicating with our clients.

The quoted language comes from the new Office of Military Commission Website.
This new policy is a sharp break from prior practice. Apparently, under the original communications system in place, military personnel opened mail to detainees in the presence of detainees to ensure there was no contraband and then handed the contents to the recipient.
The representatives have warned that legal challenges to this practice will delay proceedings even further. This legal challenge will hinge on the fact that all these high value detainees face the death penalty. Heightened due process concerns apply in this context.

Thanks for this interesting update, Beth! Coincidentally, also appearing this week was an ASIL Insight discussing al-Nashiri's pending claim before the European Court of Human Rights, written by Alka Pradhan. She's an ASIL member and Counsel for the Constitution Project's Task Force on Detainee Treatment. The Insight is available at http://www.asil.org/insights111102.cfm.