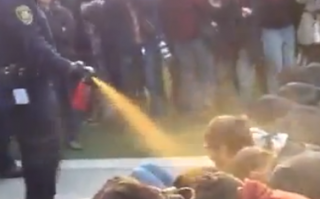 News outlets have released a number of distressing reports and disturbing images over the past week from protests in the United States and Egypt.
► In the past several days, police in California and New York have allegedly beaten protesters participating in the Occupy Wall Street movement and doused them in pepper spray. (photo credit)
► In Egypt, where citizens have taken to Tahrir Square to demand a return to civilian rule, army soldiers and policy have allegedly fired teargas, rubber-coated steel bullets, and "birdshot" pellet cartridges into crowds.
In October of last year, following a similar wave of civil unrest throughout the Middle East and North Africa, the UN Human Rights Council passed Resolution 15/21 on the rights to freedom of peaceful assembly and of association. The resolution recalls that provisions in numerous international human rights instruments provide for freedom of assembly and of association. These include but are not limited to:
The Human Rights Council used Resolution 15/21 to call on

'take all necessary measures to ensure that any restrictions on the free exercise of the rights to freedom of peaceful assembly and of association are in accordance with their obligations under international human rights law.'

'can be subject to certain restrictions, which are prescribed by law and which are necessary in a democratic society in the interests of national security or public safety, public order (ordre public), the protection of public health or morals or the protection of the rights and freedoms of others,'

these limitations on the freedom of assembly have been strictly interpreted.
For example, on several occasions, the U.N. Human Rights Committee has interpreted ordinances that require advance notice of public meetings, as well as the dispersal of peaceful demonstrations with excessive force, as restrictions on the freedom of assembly guaranteed under the ICCPR.
In addition to affirming the freedom of assembly and of association, Resolution 15/21 also called for the creation of a position of a new special rapporteur who, among other tasks, is charged with investigating violations of the rights of association and of assembly and reporting on such violations to the Council and to the U.N. High Commissioner on Human Rights. In a statement applauding the creation of this position, U.S. Secretary of State Hillary Rodham Clinton said:

'An active and vibrant civil society is one of the essential elements of a free nation, and I applaud the action by the international community today to take up the President’s call to stand firmly on the side of human rights and civil society and strengthen the ability of civil society activists around the world to bring about change in their countries. The United States will continue our leading effort to expand respect for this fundamental freedom for civil society members and other individuals all over the world.'

There are protests in the U.S. and Egypt. The comparisons stop right there.

"Beatings". Have you ever tried to move an adult who does not want to go? It's not a matter of merely picking them up. How many cops have been to the hospital for bruises, slashings (in NYC), etc.?

Please. you do no service to the cause of Int'l law or human rights trying to compare bruised apples (Occupy whatever) with squashed oranges (Egypt).

The cops who pepper-sprayed are on admin leave pending investigation... that's the way the rule of law works. (I think it's good policing and an effective deterrent, but that is definitely arguable)