Ex-head of state in the ICC dock

The International Criminal Court's situation in Côte d'Ivoire jumped to the forefront with this news, posted this morning on the ICC website: 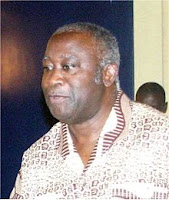 Laurent Koudou Gbagbo, national of Côte d’Ivoire, 66 years, arrived today at the International Criminal Court (ICC) detention centre in the Netherlands. He was surrendered to the ICC on 29 November 2011 by the national authorities of Côte d´Ivoire following a warrant of arrest issued under seal by the judges of the Pre-Trial Chamber III on 23 November 2011. The suspect’s initial appearance hearing before the Pre-Trial Chamber III, composed of Judges Silvia Fernández de Gurmendi (presiding judge), Elizabeth Odio Benito and Adrian Fulford, will be held promptly.

Gbagbo (above right), Côte d'Ivoire's head of state in the last decade, had refused to cede after losing a bid to be re-elected President in autumn 2010. (credit for 2008 photo) Violence ensued, as we've posted. The winner of the election, Alassane Ouattara, finally took office this past April.
As for Gbagbo, he now stands charged, pursuant to Articles 7 and 25 of the Rome Statute of the ICC, as an indirect co-perpetrator of 4 counts of crimes against humanity against the civilian population in Abidjan, Côte d’Ivoire's largest city, and elsewhere.
Gbagbo will be the 1st former head of state or government actually to appear before a chamber of the ICC -- though not, of course, the 1st, or 2d, be charged; those titles go to Sudan's President Omar al-Bashir, still at large, and Libya's Muammar Gaddafi, killed in Libya nearly 6 weeks ago.