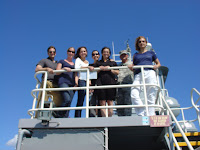 Some details about the life at GTMO... Our little band of NGOs (which included Amnesty International, the Brennan Center for Justice, Human Rights First, Human Rights Watch, Judicial Watch, the National Association of Defense Counsel, the National Institute of Military Justice (my sponsor), the New York Bar Association, and Seton Hall Law School) arrived at Andrews Air Force base outside of Washington D.C. at 5:30 a.m. for an 8:00 a.m. flight. (Some of us at right on the ferry).

Representatives of accredited NGOs fly for free; members of the press pay $400 for a round trip ticket. After enduring the security line, we enjoyed a 3 hour flight on North American Airlines which featured all of the trappings of a “normal” flight, including a movie (Unstoppable) and inedible food. Virtually everyone (except the defendant and his military entourage) who would attend the proceedings was on the flight with us, including the prosecution and defense counsel, victims and their families, staff of the Office of Military Commission (OMC), members of the press, and random service members coming off leave. 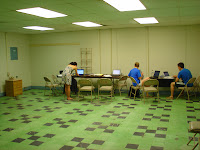 Upon landing, we learned that the NGOs would be accorded a new work space (at right), complete with desks and internet access. This was a positive development since the last hearing when NGOs spent a considerable amount of time chasing wireless access around the island. We were also greeted quickly by Rear Adm. Dave Woods, the new (since August) commander of the Joint Task Force (JTF) in charge of the detention facilities. The various g 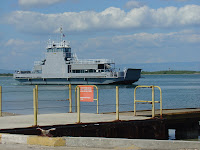 roups in attendance planed and deplaned separately, ostensibly so as not to overwhelm the baggage claim. We all knew that this was likely to prevent excessive co-mingling.


From the airfield, we took a van and then a ferry (left) to the windward side of the Bay. The ferry ride took us along a gorgeous and untouched stretch of land and past the mouth of the Guantánamo River. We were all on the lookout for manatees among the mangroves. As our guards were providing us with fresh water, Richard Kammen, learned counsel for the defense, credited the hospitable welcome to the presence of so many NGOs. From the dock, we headed to our encampment via the Navy Exchange (NEX) where we purchased lunch (at Subway) and other provisions. 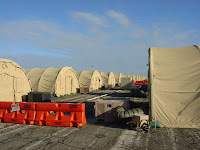 We were originally scheduled to be billeted in hard-sided housing, but we later learned we would be in tents after all because the other housing was occupied in anticipation of this weekend’s Navy Ball. “Camp Justice”—our home base—was constructed on the 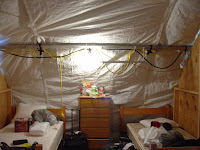 now-abandoned McCalla Air Field, which dates back to the 1930s. During the 1962 Cuban Missile Crisis, U.S. fighter planes apparently scrambled here. This little plot of land is also where U.S. officials confined many of the Haitian refugees in 1991. Our accommodations consisted of spacious arched tents (above) housing 9 beds separated into groups of 2 by 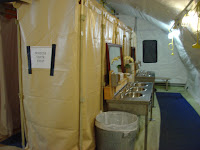 plywood walls (right). There was a small fridge (which froze all our fruit), and a member of our group purchased a coffee machine for the week.

The latrines (“bathrooms” is an overstatement) were in a separate tent, as were the showers, which were terrific: hot and strong. Someone had thoughtfully adorned the shower tent with a plastic orchid.

We had a day and a half on the Base before the hearing. A pervasive sense of ad hocism became 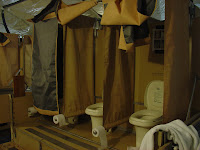 immediately apparent. Procedures and policies sometimes changed hourly. There was confusion around everything from whether we should have been issued towels with our linens (yes) and whether we could get access to the wireless network (no). There are so many services represented on the Base, and so many lines of command flowing through JTF and OMC, that it was never clear (even to our handlers and their superiors) who was the ultimate decision maker, who possessed definitive information, and to whom we should address any concerns. We were not issued a cell phone and (did not have anyone’s phone number in any case), so we were entirely dependent on our handlers to be our points of contact with everyone with any power to impact our experience on the Base. Our handlers, who suffered for the lack of clarity almost as much as we did, were all terrific and were as helpful as they could be under the circumstances. 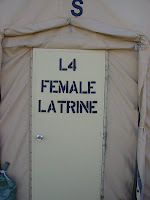 The NGO work space was a welcome improvement from past trips. It turned out to be a small room with a couple of tables in the old hangar on the air field. We were pleased to eventually learn (after several inquiries) that we could walk the 250 feet between the tents and the hangar without an escort. After some negotiations (in which someone asked us incredulously why we hadn’t brought our own cat-5 cables), we were able to get access to the Internet. This required each of us to purchase a $150 license from a gleeful private contractor (even though a monthly service costs residents only $70). Also inside the hangar was a space for the media (although a heavy object was eventually pushed behind the door connecting us to them) and a purpose-built pre-fab building that served as the venue for press conferences, complete with a camera dais, a podium with microphones, and blue velvet backdrop.

On the eve of the al-Nashiri hearing, and after hours, we received the bad news that only 5 NGO representatives would be granted access to the public gallery. Needless-to-say, we were incensed and began hand-writing a motion on a legal pad with the hope of somehow getting it before the judge the next day. After a tense meeting with the commander of Camp Justice, we were later told that there had been a misunderstanding as a result of someone reading a prior iteration of the NGO access policy. In the end, there was plenty of space for everyone (see my coverage of the actual hearing here).

In the end, our stay was a productive and comfortable one, notwithstanding a number of little blips along the way.