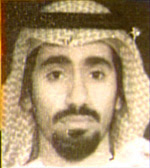 When technologically possible, I’ll be blogging from Guantánamo (below right), where I am attending the arraignment of Abd al-Rahim Hussein Muhammad Abdah al-Nashiri (left), the detainee charged in connection with the deadly 2000 attack on USS Cole in Yemen, among other alleged crimes. I am representing the National Institute for Military Justice. With me are representatives from a number of other NGOs (the usual suspects: Human Rights Watch, Human Rights First, Amnesty International) and members of the domestic and international press, including the indomitable Carol Rosenberg of the Miami Herald, who is tweeting her trip. In addition, several family members of the victims are in attendance.
At Thursday’s arraignment, it is expected that Judge & Col. James Pohl will read the charges and specifications to the accused (unless the accused waives the reading) and invite al-Nashiri to enter a plea (see Rule 904 of the Military Commission Rules (RMC)). The arraignment is 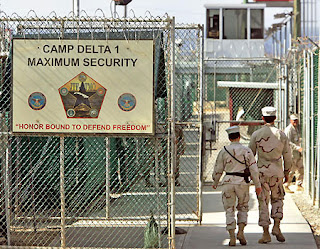 complete even if al-Nashiri declines to enter a plea. The hearing is important because once arraigned, no additional charges may be referred to that commission for trial without the consent of the accused (see RMC 601).
At the arraignment, the defense will also be entitled to make any motions before pleas are entered. There are several motions pending, as we’ve discussed (here and here), including
At the moment, it remains unclear which of these motions—if any—will be heard. Not all of the briefing has been publicly released yet.
For al-Nashiri, this is the second time around the block. The prosecution swore the first set of capital offenses against al-Nashiri in 2008. This charge sheet covered only The Sullivans and USS Cole attacks. Then, Convening Authority Susan Crawford referred those charges for trial. However, prior to the prosecution providing any discovery and prior to al-Nashiri’s original arraignment (which was scheduled for February 9, 2009), the prosecution moved for a continuance in light of the fact that on January 22, 2009, President Obama issued an executive order directing a review of the military commission process. The judge denied the continuance on the ground that
This has proved to be a sadly ironic ruling given the lack of progress on the case. The prosecution objected and eventually withdrew the charges in February 2009. The defense subsequently argued that the withdrawal of charges was improper as it was done in order to prevent al-Nashiri from asserting his rights to a commission. (Note that Judge Pohl's ruling focuses on the public's interest in a speedy trial; the MCA provides for no speedy trial rights for defendants).
The withdrawal of the original charges has also proved prejudicial to the accused. The new charge sheet includes a third attack, that on merchant vessel Limburg, a French oil tanker attacked in October 2002. The attack was similar to the USS Cole and The Sullivans operations in that it used an explosive-laden boat to blast a hole in the hull of MV Limburg. The attack resulted in the death of a Bulgarian crew member and the spillage of 90,000 barrels of oil in the Gulf of Aden. This attack generated three additional and different charges:
If al-Nashiri attends Thursday’s hearing, it will be the first time he has been seen by the public since his capture in the United Arab Emirates in 2002. Since that time, he was in CIA custody (apparently in Poland and Thailand) until 2006 when he was transferred to GTMO.
Stay tuned....
by Beth Van Schaack at 5:14 PM