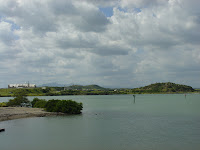 On our final morning on the Guantánamo Bay Naval Base for the al-Nashiri hearing—the United States’ oldest overseas Navy base—we were treated to a camera-free tour of the Base. The island is covered in shrubs and forests of cacti, so it feels less tropical than other Caribbean islands. Rocky beaches and cliffs dot the coast with prominent signs warning against feeding the iguanas. The latter are everywhere, aggressively guarding their little patches of land. Guantánamo is also famous for its banana rats; the best way to see them is apparently to drop popcorn at the outdoor cinema.
Our first stop was a promontory featuring a defunct lighthouse surrounded by detritus from the Haitian boat crisis, including about half a dozen wooden boats in various stages of disrepair. We next headed “downtown” (somewhat of an overstatement), which consists of the Navy Exchang 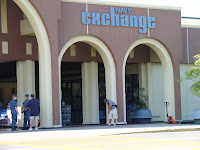 e (NEX, at right), a couple of fast food restaurants, various sports fields, an outdoor cinema, and a gym. On the base can also be found: a dive shop, inter-denominational church, bowling alley, Irish pub, Tiki Bar, and school. The base boasts a vibrant night life with Karaoke, a Filipino band specializing in ’80s music, and regular acts brought in from the mainland (the comedienne Caroline Rein is arriving next week). Our curfew (of 9 p.m.) prevented us from enjoying many of these activities. A number of other activities (bingo, crafts, exercise classes) are organized for dependants. We also stopped by Marine Hill—definitely one of the prettiest spots on the Base—where scenes from A Few Good Men were filmed with Demi Moore and Jack 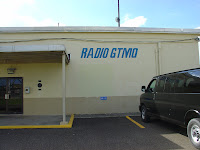 Nicholson. The Base has its own radio station (Radio GTMO, left), whose tag line is "Rockin' in Fidel's Backyard."
There are about 8000 permanent residents on the Base, including members of the U.S. military (all five armed services are present and intermingling on the island), dependents, contractors, foreign nationals (mostly Filipinos and Jamaicans who man all the service industries), and some native Cubans who either resided in the vicinity of the Base at the time the U.S. asserted control or have subsequently sought refuge here. Several of the housing complexes are obviously military housing (my favorite was the “Bachelors’ Quarters”), but some resemble any American suburban neighborhood with street names like “Nob Hill.”
Fresh water has always been a problem on the Base. Originally, the Navy purchased water from 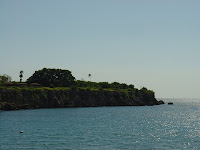 Cuba, although in 1964, Castro cut off the water supply in retaliation for the arrests of some Cubans illegally fishing in Florida waters. Later, the U.S. contracted with Jamaica to provide fresh water. A desalination plant now provides all the water needs of the base. Water is transported around in above-ground pipes that run alongside the roads and provide convenient perches for iguanas.
From John Paul Jones Hill—the highest point on the base—we could see 365 degrees around the island, including the outer edges of the Naval Base. Although they are not presently in use, four huge windmills run along the ridge line here with the ability to provide 25% of the Base’s electricity needs. The Base’s “borders” are dotted with old bunkers and watch towers on both the American and Cuban sides. Apparently, the Cubans have a robust surveillance program, and so everyone assumes that unsecure wireless communications are overheard. At the moment, all communications are wirele 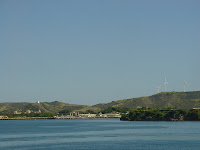 ss, but there is talk of running fiber optic cables to the U.S. to increase communications security.
From the Hill, we also had a view of two enemy combatant camps in the distance: Camp Delta and Camp America. We also passed what we surmised to be the turnoff to the high security Camp 7, which is reputedly built into the side of one of the hills. We then swung by the long-empty Camp X-ray (which also dates to the Haitian refugee crisis) where "war on terror" detainees were housed for the first 2 months of the life of the detention center while Camp Delta was under construction. The camp remains untouched pursuant to a court order. Although it is entirely overgrown with vines and other vegetation at this point, it is still possible to see the perimeters of triple-level concertina wire and the open-air metal cages where the first enemy combatants were housed in 2002. Needless-to-say, we were not allowed to photograph any of this and we were even advised not to point in the camps’ general direction. That said, we had a clear view of the camps upon take off from the airfield on our way off the island.