In a week that promises to require considerable diplomacy by officials of the International Criminal Court, states parties may reach consensus on who will become the ICC's next Prosecutor.
The special need for a deft hand comes from the news that, yet again, an ICC-accused Gaddafi has fallen into custody.
It was reported yesterday that Saif al-Islam Gaddafi is being held by the transitional government of Libya, which took power after a NATO-supported rebellion toppled the 4-decades-long regime of Saif's father, Muammar Gaddafi, killed exactly a month ago. Reports are that ICC Prosecutor Luis Moreno-Ocampo will travel to Libya to try to negotiate transfer of Saif to the Hague-based ICC (above right), pursuant to an international arrest warrant. (Same holds for his co-accused, captured today.) But the new Libyan leadership reiterated its preference for domestic prosecution -- for alleged crimes that, in Libya but not in the ICC, are punishable by death. (photo credit)
Meanwhile, in New York, Christian Wenaweser, Liechtenstein Ambassador and President of the ICC Assembly of States Parties, said in a statement:

'I look forward to the continued cooperation of the Libyan authorities with the International Criminal Court, pursuant to their obligation under Security Council resolution 1970. ... It must be ensured that Saif Al-Islam is tried in a court of law and in accordance with international standards. Should the Libyan authorities wish to try him in Libya, they can make the case before the Court that their national judicial system is willing and able to do so in an independent and impartial manner.'

(Prior IntLawGrrls posts on the potential for a complementarity contest available here.)
Even as it looks toward Libya, the ICC Assembly continues also to look toward the person who will succeed the current Prosecutor upon election in December.
Who that is may become clear before week's end.
According to documents posted at the Assembly's Election of Prosecutor webpage, members of the Assembly's New York Working Group (along with officials from Botswana, Timor-Leste, Estonia, Costa Rica, and the Netherlands, representing five regional "focal points") have met at U.N. headquarters with the 4 finalists (prior post) for the position: on November 2 with current ICC Deputy Prosecutor Fatou Bensouda; on November 9 with Robert Petit, Counsel in the Crimes Against Humanity and the War Crimes Section of Justice Canada; on November 11 with Andrew Cayley, International Co-Prosecutor at the Extraordinary 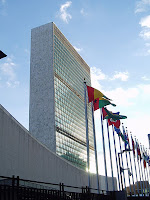 Chambers for the Courts of Cambodia; and last Monday, November 14, with Mohamed Chande Othman, the Chief Justice of Tanzania. (credit for photo at right of U.N. headquarters)
Wenaweser indicated in an October 28 letter that he was working "with a view to assessing the feasibility of a consensus by the Thanksgiving weekend." The week will tell if yesterday's news of Gaddafi's arrest alters that aim.