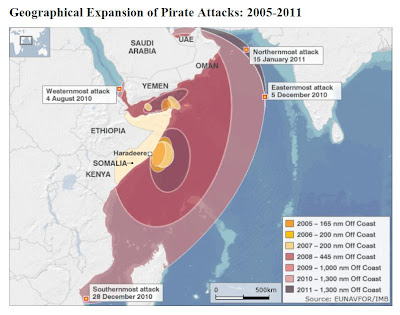 The number of maritime piracy attacks is spiraling ever-upward, pirates are increasingly using violence to carry out their attacks, and pirates are demanding more and more money for the safe release of their captives. Between 2006 and 2010, the number of yearly pirate attacks reported to the International Maritime Bureau, a 20-year-old, London-based division of the International Chamber of Commerce, almost doubled. (chart credit)
Not only did pirates attack ships, but in 2010, pirates took hostage an unprecedented 1181 seafarers—eight of whom pirates murdered. Moreover, maritime pirates are getting paid huge sums for their violent activities: average ransoms are estimated at between US$2 million and US$3 million.
This is a discouraging trend, especially because over the last several years, the international community has spent billions of dollars to support naval fleets that patrol pirate-infested waters with the goal of repressing piracy. While these naval fleets have thwarted some attacks and captured some pirates, the evidence about the increasing frequency of maritime piracy attacks suggests that the full deterrent effect of these naval resources is not being realized.
Instead, a culture of impunity reigns.
Consider this statistic from the report by Jack Lang, Special Advisor to the Secretary-General on Legal Issues Related to Piracy off the Coast of Somalia, which was delivered in January to the U.N. Security Council: About 90% of captured pirates are being released rather than prosecuted.
One reason cited for this culture of impunity, which I examine in my article “Maritime Piracy And The Impunity Gap: Insufficient Nationals Laws Or A Lack Of Political Will?”, forthcoming in Tulane Law Review, is the purported absence of domestic legislation to facilitate piracy prosecutions.
But, why would states lack domestic anti-piracy legislation?
After all, universal jurisdiction over piracy has existed for more than 100 years, meaning that states can prosecute pirates who attack on the high seas even where the attack does not involve the state’s citizens as either perpetrators or victims. In addition, most states are parties to the 1982 United Nations Convention on the Law of the Sea (UNCLOS), which codifies piracy’s status as a universal jurisdiction crime and which encourages states to cooperate in the repression of piracy to the fullest extent possible.
Yet, the anecdotal evidence suggests that states have not enacted piracy laws consistent with this international legal framework. In fact, since the passage of Security Council Resolution 1918 (April 27, 2010), and through to Resolution 2015 (October 24, 2011), the Council and other international actors have called on states to rectify the present culture of impunity by criminalizing piracy under their national laws and by considering favorably the prosecution of piracy suspects.
In an effort to determine what might be lacking in state anti-piracy laws and to contribute to the discussion of how to end the culture of impunity that surrounds piracy, in the forthcoming article, my article analyzes the nature of domestic anti-piracy laws in states for which I was able to obtain information in English. The chart below shows the states included in the sample and organizes them by type of piracy laws (or lack thereof):

Overall, my analysis supports a conclusion consistent with the Security Council’s observation that states generally lack domestic piracy laws consistent with customary international law and UNCLOS.
► For example, even where they have enacted a specific anti-piracy law—and are not relying only on general categories of crime such as robbery, assault, or murder—many states still tend to require some nexus between the state and the crime in order to exercise jurisdiction.
In fact, as the chart above shows, at most fifteen of the states surveyed specifically define piracy using UNCLOS or some other formulation, and also provide for the exercise of universal jurisdiction.
► In addition, the analysis shows that even some of the universal jurisdiction anti-piracy laws may not be sufficient to successfully prosecute pirates.
Rather than tracking UNCLOS’s language, some laws provide broadly for universal jurisdiction “as defined by the law of nations.” Because that definition does not outline the elements of a piracy offense, however, some courts may conclude that certain acts—such as attempted, but not completed, attacks on ships—are not covered and cannot be punished. Indeed, as IntLawGrrls then posted, this was the conclusion of the U.S. District Court in United States v. Said, 757 F. Supp. 2d 554, 566 (E.D. Va. 2010).
The state laws that rely on the direct incorporation of treaty provisions have similar deficiencies. The very absence of domestic legislation defining the precise contours of the crime and its penalties renders it possible for alleged pirates to argue that they should not be punished, because they have not been provided with advance notice of exactly what conduct is proscribed.
It is true that piracy cases may result in claims for asylum, can be costly, require the state to expend prosecutorial and judicial resources that could otherwise be deployed to handle domestic crimes, and can involve significant evidentiary difficulties. But, I argue that states should not be able to so easily shirk their duties under UNCLOS to cooperate to the fullest extent to repress piracy. 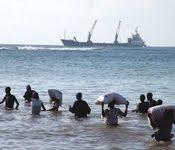 Piracy is a universal problem that harms the international community as a whole. (credit for UN photo) If the world community wants to halt the increasing threat posed by maritime piracy, then all states must embrace their duty to share in the burden of prosecuting pirates, which means that all states must first pass the necessary domestic laws authorizing the exercise of universal jurisdiction over piracy offenses.