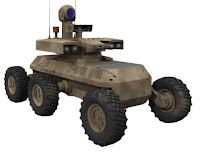 'In the face of massive development of robots able to use lethal force, there must be regulation.'

-- Captain Mark Hagerott, professor of the history of science and technology at the U.S. Naval Academy, Annapolis, Maryland. (photo credit) He was quoted in "Avec les robots guerriers, la guerre va changer de visage," an excellent Le Monde article offering an array of opinions about this the emergence of robotic military personnel. (It follows an equally provocative article on autonomous robotic warfare by Peter Finn, published by the Washington Post in September.) Le Monde writer Nathalie Guibert talked with Hagerott and others in the context of a symposium on the subject earlier this month at Ecoles de Saint-Cyr, the French military academy located in Coëtquidan in Guer, in the Morbihan department of the province of Brittany. Among many other military experts quoted was French Brigadier General Michael Yakovleff, a Saint-Cyr graduate now serving at NATO. Yakovleff asked a question emblematic of the tactical and ethical issues presented:

'If my robot is attacked, am I to fire into the crowd to defend it?'