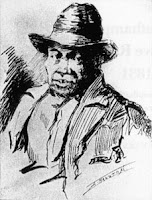 On this day in ...
... 1831 (180 years ago today), 6 days after his trial, conviction, and sentence to death, the 31-year-old man at right, Nat Turner, was hanged in Virginia after having led a rebellion of slaves, begun in August of the same year. (image credit) Many others died in the violence surrounding the rebellion, as it was known. New laws were enacted, which further restricted not only slaves, but also free Americans of African ancestry.