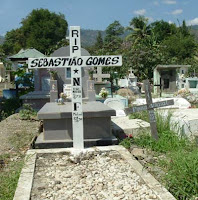 On this day in ...
... 1991 (20 years ago today), in the Timorese capital of Dili, troops from Indonesia, which had occupied East Timor since 1975, fired on several thousands pro-independence demonstrators who took part in a funeral procession to the Santa Cruz cemetery. (photo credit) At least 250 persons were killed in this Dili Massacre. The tragedy is now commemorated as a public holiday in East Timor, which won independence in 1999 and became the 191st U.N. member state in 2002.