On this day in ...
... 1976 (35 years ago today), by a vote of 425 aye-59 nay-13 abstain, legislators who, for the most part, had been appointed by dictator Francisco Franco voted to dissolve the Parliament and schedule general elections for the coming year. (credit for image of Spain's coat of arms) The decision would win the approval by more than 94% of the Spanish populace in a national referendum in December. The New York Times wrote of the legislature's action on this day: 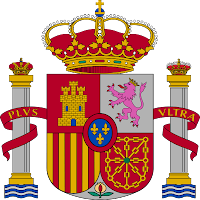 The vote, which came two days before the first anniversary of Franco's death, was a stunning victory for Prime Minister Adolfo Suarez, the personal choice of King Juan Carlos and the leader in the slow dismantlement of the dictatorial institutions of Franco Spain. Many had predicted before the vote that it would be close.