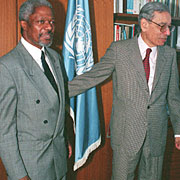 On this day in ...
... 1996 (15 years ago today), the lone "No" vote of the United States denied a 2d term to incumbent U.N. Secretary-General, the Egyptian diplomat Boutros Boutros-Ghali (near left). All 14 other members of the Security Council voted for him. But the exercise of the veto by the United States, among the Council's 5 permanent members, nullified that vote. An unnamed "senior U.S. official" said to the Los Angeles Times that Boutros-Ghali had

become a symbol of all that is wrong with the world body and that the only way to rebuild American public confidence in and congressional support for the U.N. is with a new chief executive.

The veto spurred "[w]eeks of confrontation between the United States" and another P-5 Council member, France, until, as The New York Times reported on December 14, 1996, a compromise was reached and the man above at far left, Kofi Annan of Ghana, was elected the 7th S-G.(photo credit)