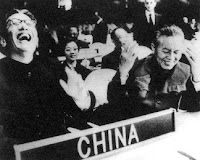 On this day in ...
... 1971 (40 years ago today), the People's Republic of China assumed the China seat as a permanent member of the U.N. Security Council -- a seat that since the founding of the United Nations in 1945 had been held by the Republic of China, a Nationalist government that had fled from the mainland to the island of Taiwan in the late 1940s. (credit for Oct.25, 1971, photo of reaction of China delegation at General Assembly upon securing the U.N. seat) The Permanent Representative of the new P-5 member's 1st speech including this passage, which, as viewed by The New York Times, contained "allusion ... unmistakably to the United States and Soviet Union":

'colonialists and neo-colonialists and particularly the one or two superpowers have not ceased their activities in practicing power politics and in carrying out aggression, interference, subversion and control against other countries and their people.'