On this day in ...
... 1853, a daughter, Helen Magill, was born in Providence, Rhode Island, into a Quaker family. Her father's professorial posts proved her entree into formal studies: as a child s 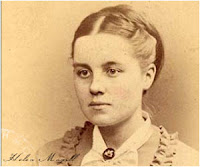 he was the only girl student at Boston Public Latin School. She was among the 5 women and 1 man who made up the 1st graduating class at Swarthmore College, where her father was president. In 1877, she became the 1st American woman to earn a Ph.D. -- in Greek, from Boston University. Following further studies in England, she returned to the United State and became a teacher. Three years after meeting a retired-Cornell-president-turned-diplomat (and onetime classmate of her father) while presenting a paper at American Social Science Association, she married him in 1890. Diplomatic service would find the couple living in St. Petersburg, Russia and Berlin, Germany, before his death in 1918 -- 5 years after she made a stir by voicing opposition to women's suffrage. Helen Magill White (above right) died in Maine in 1944. (credit for 1873 photo)