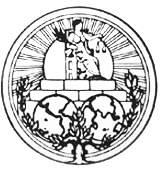 On this day in ...
... 1979, the United States sued Iran in the International Court of Justice (logo at left). The U.S. application that instituted ICJ proceedings alleged that Iran had breached its obligations under an array of treaties -- among them the Vienna Conventions on Diplomatic Relations and on Consular Relations -- by its failure either to secure the release of hostages being held at the U.S. embassy in Tehran or to punish the persons responsible for the November 4, 1979, embassy takeover. (prior post) The case remained on the docket until May 1981; it was removed a year after the Hague-based Court's ruling in favor of the United States (prior post) prompted a settlement agreement between the states.