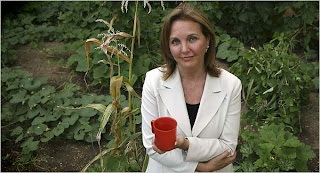 On this day in ...
... 2006 (5 years ago today), U.N. Secretary-General Kofi Annan and Food and Agriculture Organization Director-General Jacques Diouf appointed Josette Sheeran (right), then serving as the U.S. Under Secretary of State for Economic, Business and Agricultural Affairs, to become the new Executive Director of the World Food Programme. (prior posts here and here) Her webpage elaborates:

As leader of WFP, Ms. Sheeran manages the world's largest humanitarian agency, which provides food assistance to more than 105 million people in 75 countries – 3.8 in Darfur alone – including victims of war and natural disasters, orphans and families affected by HIV/AIDS, and children in poor communities.


(photo credit) Sheeran had worked in the State Department's economic diplomatic corps for 2 decades, had served as Deputy U.S. Trade Representative, and, before that, was managing editor of the Washington Times.