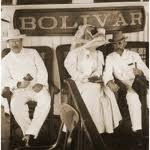 On this day in ...
... 1906 (105 years ago today), U.S. President Theodore Roosevelt (far left) and his wife, Edith Kermit Carow Roosevelt (center), embarked on a journey to inspect the building of the Panama Canal; in this photo, they're shown days later, on a ship in Panama. The sojourn marked the 1st Presidential trip abroad, a landmark not necessarily viewed with favor, as this lede from a New York Times article indicated:

President Roosevelt left the White House at 3:30 to-day on the trip to Panama, that will violate the traditions of the United States for 117 years by taking its President outside the jurisdiction of the Government at Washington.