Peace through Commerce? The Idea of the Jerusalem Arbitration Center

(My thanks to IntLawGrrls for the opportunity to contribute this guest post)
Newspapers report daily about the stalemate in Israeli-Palestinian peace talks, deadly rockets sent from Hamas, bids for statehood, and the unabated building of settlements. (Prior IntLawGrrls posts here and here.)
These dismal reports, however, obscure a simple reality: Every year, Israelis and the Palestinians engage in an estimated US $4 billion in trade. Israel is by far Palestine’s largest trading partner and, according to some estimates, Palestine is Israel’s second largest trading partner after the United States. In other words, while politicians on both sides seem locked in an intractable battle against peace, peaceful exchanges occur every day between ordinary Palestinians and Israelis.
Of course, some disputes arise out of these commercial transactions.
In those disputes, Israelis have full access to the machinery of civil justice under Israeli law. Meanwhile, it can be exceedingly difficult for Palestinians to participate in judicial proceedings in Israel, and Palestinian court judgments are generally unenforceable.

About 2 years ago, a retired Israeli military general who now heads up the International Chamber of Commerce of Israel decided that situation had to change. Both Israeli and Palestinian businesses, he knew, stood to gain from a more neutral mechanism through which to resolve their disputes.
Armed with this insight, Oren Shachor called an old Palestinian friend, Samir Hulala, who heads up the largest Palestinian holding company. They met in Tel Aviv, a meeting that started with seemingly epic questions and insurmountable doubts, but ended with the idea of the Jerusalem Arbitration Center. The purpose of the JAC is to resolve through international arbitration commercial disputes arising between Israelis and Palestinians. (See slides here.)
International arbitration has a long history of providing fair, neutral, and reliable dispute resolution for parties from different cultural and legal traditions. In the absence of arbitration, international commercial exchanges are inevitably hampered by self-help, cumbersome financing, or piecemeal contractual arrangements. The JAC could provide a better alternative for Israeli-Palestinian exchanges.
To create the Jerusalem Arbitration Center, however, the International Chamber of Commerce of Israel -- which goes by the acronym -- ICC Israel -- needed a viable partner. Oren and Samir envisioned a new “ICC Palestine,” which would be formed with the help of Palestinian businessman Munib R. Masri. Garnering support from the Paris-based Secretariat of the International Chamber of Commerce was challenging, and required a global, in-person campaign. That secretariat wanted assurances before it would lend its reputation for excellence and resources to the International Chamber of Commerce of Palestine and the Jerusalem Arbitration Center. But it had long championed the notion of “peace through commerce,” so it soon understood that this was a serious international endeavor to make that motto a reality. In a record three months, the ICC Palestine was established and, by May 2011, a Memorandum of Understanding for the JAC had been signed by the ICC Israel, the ICC Palestine, and the Paris-based International Secretariat.
The structure of the Jerusalem Arbitration Center is to be a symbol of the equality and empowerment that it seeks to ensure through its arbitral processes. Its legal form will be a joint venture, with ownership shared equally between the ICC Israel and the new ICC Palestine. The Paris secretariat will provide guidance and international support. The joint venture agreement and arbitral rules are being jointly by Palestinians and Israelis, and administration of the JAC will also be divided equally. While the center will be headquartered in Jerusalem, there are plans to build contact centers in Ramallah and Israel, the respective homes of the ICC Palestine and the ICC Israel. 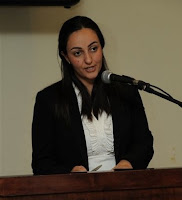 The ICC Palestine still has all the markers of a start-up. Chaired by Munib Masri, the institution is administratively headed by a vibrant 30-something Palestinian woman named Yara Asad (left), who has an MBA from Duke and is currently finishing her PhD in Paris. It is a one-room operation running on a shoestring budget out of an office borrowed from a Palestinian pharmaceutical company. What Yara lacks in experience and legal training, she makes up for with her determination and excellent managerial skills. Yara is emblematic of the new generation of Palestinians who have a vision of the world beyond their troubled, and as yet undefined, borders—and they are determined to make that vision a homemade reality.
On the ICC Israel side, Oren Schachor served in the Israeli military for more than 30 years, including as the general in charge of overseeing the occupation in the West Bank and Gaza. Today, in his own words, he is much more “a soldier of peace than a general of war.” He is aided at the ICC Israel by Baruch Mazor, a prominent Israeli businessman, who is also a former Israeli military officer and an informal statesman in international efforts on behalf of Holocaust survivors and their children. While the ICC Israel is a long-standing institution, Oren and Baruch work more like tireless volunteers.
Creating the JAC requires continued suspension of disbelief and a slow building of reciprocal trust between peoples who have a long history of reasons to distrust each other. As Baruch explains, he knows that the ICC Israel has a significant advantage over the ICC Palestine in “know-how” about international arbitration generally and about the ICC as an institution (the ICC Israel has existed for over 50 years and enjoys representation on the ICC Paris’ Executive Board). That is why he and Yara speak nearly every day to work through the innumerable practical details to make the project work.
Creating the JAC and enabling Palestinians to be able to participate meaningfully entails many challenges. I spent most of my summer there learning about those challenges. But these challenges are an invitation, as captured by one Palestinian’s reaction. After I described to her the JAC project, she slumped back in her chair and said, with a palpable sense of incredulity, “This is not just human rights. This is real.” Herself a passionate human rights attorney, she was not discounting the importance of human rights. She was instead expressing her astonishment that, despite their unremitting disputes over land, Palestinians and Israelis had somehow found common ground, and were together building something meaningful.

by Catherine Rogers at 5:15 AM