Prospects for justice in Libya 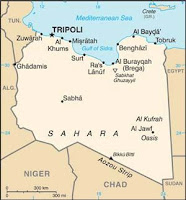 So International Criminal Court Prosecutor Luis Moreno Ocampo has ducked an ugly confrontation with the Libyan government about where to try Saif Al-Islam Gaddafi and former intelligence chief Abdullah Al-Senussi.
Rather than insist that the Libyan judicial system is in no shape to take on a complex prosecution, Moreno Ocampo has conceded that Libya can try the case – with ICC help. (Prior IntLawGrrls posts on this issue available here.)
Still not clear:
► On the one hand, whether that means that the ICC would sit in Tripoli, as Article 3(3) of its Rome Statute allows (map credit); or
► On the other hand, whether that means that the proceedings would be national, with foreign technical assistance (something the ICC in the past has said it is not set up to provide). (And see above update post.)
Plus, if the first path were pursued, it would still be up to the ICC judges to decide what should happen if Libya brought a challenge to the Court’s jurisdiction on grounds that Libya is not unable nor unwilling to prosecute the two men. Maybe that's what Moreno Ocampo meant yesterday when he told reporters in Tripoli that "our judges have to be involved." But it sounds a bit strange to me to have the Prosecutor pre-commit on a judicial decision.
Assuming the Libyans choose the second path, and move to try the two (along with others) under Libyan law, there are a number of as-yet unsolved problems.
It’s not clear whether Libyan law includes a provision on crimes against humanity, and my guess would be it’s unlikely. Will the ICC accept a prosecution for murder or torture instead of crimes against humanity? Seems problematic. The Libyans can of course pass a new law, but then there’s a principle of legality/ex post facto problem with trying people for crimes that weren’t in the penal code when committed. They could do as the Latin Americans have done, and find that customary international law criminalized these acts long ago, so there’s no problem with the principle of legality. But that leaves them having to import penalties, theories of liability and probably some other issues from some other part of domestic or international law.

All of which is to say, Moreno Ocampo (right) may have avoided one sticky wicket, only to plunge the Libyans into another one. Not to mention all the problems of lack of capacity, lack of evidence gathering abilities, concerns about due process, and the like.
Meanwhile, Libya has produced a draft transitional justice law.
While it’s not clear whether this will be the final shape of things, the draft creates a committee appointed by the Transitional National Council to deal with investigations and reconciliation dating from September 1969 until the present. The committee would be organized with an executive board of directors in charge of committees on investigation, reconciliation, and reparations. All the members will be Libyans, chosen for their personal characteristics. Only exclusion: no former Revolutionary Movement or Guard members.
The Committee will have the power to subpoena evidence and witnesses; non-cooperation can lead to a fine and up to 6 months in jail. The Committee will investigate, and pass the results of its investigation on to the courts with a recommendation for prosecution. Its mandate would cover organized and unorganized violence on any side, before or after liberation. It would thus cover not just Gaddafi-era crimes but those committed by anti-Qaddafi militias, including the execution of Gaddafi himself.
How a consideration of individual cases will lead to an analysis of the overall patterns and causes of violations is not clear in the draft.
It calls for (mostly) public hearings, but not necessarily a public report. There are also reparations provisions, a call for expropriation of ill-gotten wealth from the Gaddafi family and associates, and provisions on re-nationalizing those who Gaddafi stripped of their citizenship.
Lots of good things in the draft, but also a lot of dependence on a legal system that, at least we’re being told here in the United States, is in bad shape. Is it that we don’t understand the system well enough? Or that the Libyans overestimate its abilities and underestimate the difficulties? Or both?