Statelessness & the right to have rights 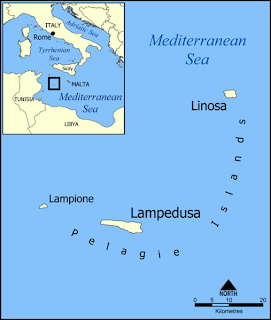 In 2011 the Italian Lampedusa Island has turned, to paraphrase the artist Francis Picabia, into a beautiful monster.
Spectacular views unfolding from the Island were marred with images of thousands of people crowded in immigration centers, and hundreds more dying on their way to find shelter there. (map credit)
Although the Island has long been a destination of migrants from North Africa, looking for safe haven and shelter in Europe, the influx reached its peak in 2011, as IntLawGrrl Jaya Ramji-Nogales has posted. The new wave of immigrants and the island’s inability to handle them renewed the European political debate on migration.
In my paper, Lampedusa and Beyond: Recognition, Implementation and Justiciability of the Stateless Persons’ Rights under International Law, I argue that this debate should be expanded to discuss the protection of stateless persons’ rights beyond the moments of crises.
A number of scholars have addressed the question.
► On the one end of the continuum is the20th century philosopher (and IntLawGrrls foremother) Hannah Arendt (below right). (image credit) Herself stateless for more than a decade, she argued that paradoxically, human rights can only be realized within the nation state. She wrote: 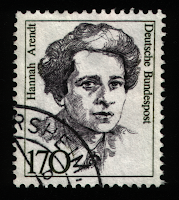 The Rights of Man had been defined as 'inalienable' because they were supposed to be independent of all governments; but it turned out that the moment human beings lacked their own government and had to fall back upon their minimum rights, no authority was left to protect them and no institution was willing to guarantee them.'

Many commentators, including Seyla Benhabib, Laura van Waasm, and Patrick Weil, have shared Arendt’s skepticism.
► On the other end of the continuum is Dr. Yasemin Soysal (below left), of the Department of Sociology, University of Essex, England. (photo credit) In her well-known book, The Limits of Citizenship: Migrants and Postnational Membership in Europe (1995), Soysal argued that elaboration and conclusion of international human rights treaties, including those that relate to non-citizens, influence the membership situation of those persons domestically, either by creating a separate legal category of migrants or by influencing domestic discourses and invocation of rights claims. Soysal argued: 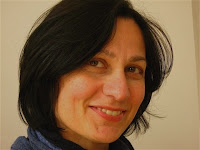 'Individual rights and obligations, which were historically located in the nation-State, have increasingly moved to a universalistic place, transcending the boundaries of particular nation-States.'

My article contributes to this trajectory of debate in two ways.
First, the article puts forward a genealogy of state participation in the international legal recognition of statelessness and of the enforcement of the treaty regime on statelessness. This allows for novel conclusions as to what extent international law has been effectively implemented in protecting the rights of stateless persons.
Second, I enrich the aforementioned debate with the most recent specific analysis of the treatment of the stateless persons’ rights- claims by a major international human rights tribunal, the European Court of Human Rights. (credit for photo, below right, of court's headquarters in Strasbourg, France)
As a result, I advance a number of findings.

Overall framework
International law has evolved from considering that stateless persons have no rights, as it did in the 1930s.
Today, there is an elaborate international treaty regime on statelessness, which includes three types of treaties:
►1st, general treaties that cover the rights of stateless;
►2d, treaties that protect the rights of stateless among disadvantaged groups, such as women and children; and
►3d, treaties that protect specific rights of stateless persons, such as copyright.
Nevertheless, states are reluctant to accept international obligations in relation to stateless persons. This is evidenced by continuously low number of states participating in these treaties.
States are more likely to accept international obligations in relation to statelessness when those obligations are part of a regime of protecting disadvantaged populations, such as women and children.
Even in this instance, however, the implementation of these obligations is a problem. Provisions on the nationality of women and children are variously: subject to interpretation in accordance with the domestic legislation; hotly contested; or given by states a low priority for implementation.

European Convention framework
The system established by Europe's 1950 Convention for the Protection of Human Rights and Fundamental Freedoms maintains three separate rights regimes depending on the legal status of the rights-bearer:
► 1st, rights applicable to everyone, notwithstanding their immigration status;
► 2d, rights applicable only to citizens; and
► 3d, rights applicable to migrants.
Overview of the court’s case law in relation to the claims by stateless claimants evidences that some individual claimants have been able to defend their rights through the Convention machinery, including their rights to private and family life, right to freedom of movement, prohibition of torture and the right to a fair trial.

The jurisprudence of the Court has advanced in the direction of affording more protection to stateless persons’ rights in two areas; specifically: the threat or the fact of expulsion of stateless persons has acquired more seriousness and a bigger potential for being recognized as a violation of the Convention; and case law indicates emerging socio-economic obligations of host countries towards stateless individuals.
Nevertheless, despite this positive dynamic, there are three particular issues, which hinder effective protection of stateless persons’ rights.
► 1st, those stateless applicants who pass the admissibility threshold of the Court (up to 90% of applications are declared inadmissible) are confronted with the Court’s inconsistent approach to determining the principles applicable to the recognition of statelessness.
► 2d, in the third-party intervention, or amicus curiae, procedure, stateless persons have no possibility of being supported by the state’s intervention.
This is because states can only intervene in support of an application by their own nationals. As the third-party intervention procedure is an important mechanism to provide the Court with expertise and information, the lack of this possibility puts stateless persons at a disadvantage vis-à-vis citizens. Furthermore, it deprives the court of the ability to hear voices representative of the condition of statelessness.
► 3d, the larger structural problem should be kept in mind.
Applicants often have to wait for up to 14 years before the Court adjudicates their claims. Meanwhile, applicants often face deportation threats and undergo detention.
Costs for legal services for preparing an application vary, from the equivalent of US $25 to as much as $160 per hour.
How many of the stateless persons, who already have trouble realizing their rights due to lack of citizenship status, can afford to wait under duress for more than a decade for their application to be adjudicated, or pay for legal services without legal aid? Undoubtedly, such persons are a minority. Hence, the dozen or so cases in which stateless persons vindicated their rights through the Court are a tip of the iceberg of stateless persons’ grievances which might require redress.

Involving the UNHCR
Finally, my article puts forward a set of recommendations which can partially address the aforementioned problems.
Among others, I suggest amending the European Convention so that the Office of the U.N. High Commissioner for Refugees, the agency experienced in advocating internationally for stateless persons, will be endowed with the right to intervene as a third party before the European Court of Human Rights when stateless persons’ claims are at stake.

UNHCR and Asylum Aid have just released a useful publication: Mapping Statelessness in the UK