An assessment of state responsibility preceded that of individual criminal responsibility in the expert report on Syria released yesterday.
Released was the 39-page report of the Independent International Commission of Inquiry on the Syrian Arab Republic, a body appointed in September by the U.N. Human Rights Council and comprising a 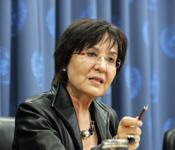 professor in Turkey and the U.N. Special Rapporteur on Violence against Women, and Karen Koning AbuZayd (right) (photo credit), who's long been active in U.N. human rights endeavors.
To begin its discussion of responsibility for the many atrocities enumerated, the report states at paragraph 109:

Only then does it turn to the question of individual criminal responsibility -- a question it leaves for the most part unanswered, noting that Syria is not a party to the International Criminal Court and that its national laws likely would immunize from prosecution persons most responsible.
The order of responsibility set forth seems significant, and not just because this report -- unlike an analogous 2005 report on Darfur -- falls short of recommending U.N. Security Council referral to the ICC of the situation in Syria. The closest it came was to recommend that the U.N. Human Rights Council "[t]ake urgent steps, including through the General Assembly, the Secretary-General and the Security Council, to implement the recommendations made in the present report." (The report also prompted others to renew calls for a Security Council referral; in an earlier post, I voiced concerns about the possibility.)
The decision to discuss state responsibility also stands as a reaffirmation that states bear primary responsibility to protect their own civilians from harm. That has not always been a given, as our colleague William Burke-White explains in part I of a new survey chapter, Adoption of the Responsibility to Protect. General acceptance of a state's primary responsibility is an essential prerequisite of the second aspect of the responsibility to protect doctrine; that is, that a state's failure to shoulder its responsibility gives rise to the responsibility of the international community to act.
Entrenching the concept of primary responsibility in international documents promotes a culture of collective responsibility and embeds prevention as a normative goal. It is a notable feature not only of this report, but also of Article 1 of the Proposed International Convention on the Prevention and Punishment of Crimes Against Humanity that IntLawGrrl Leila Nadya Sadat spearheaded and to which others of us contributed. One day, perhaps, such entrenchment will give rise before-the-fact actions that eliminate the need for after-the-fact intervention and adjudication.
The inquiry commission did conclude its report with a host of recommendations directed at various actors related to Syria. (map credit) All recommendations appear in the full report, beginning at paragraph 112. Paraphrased and excerpted, recommendations include: 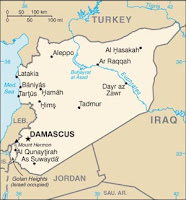 To the Syrian government
► End gross human rights violations.
► Initiate investigations under domestic and international law, and while investigation is pending suspend security personnel alleged to have violated human rights.
► Ratify the Rome Statute of the ICC and enact national implementing legislation.
► End arbitrary detention and allow international monitoring of detention centers, as well as overall in-country access for human rights monitors, aid agencies, and journalists.
► Replace immunity laws with laws governing security forces according to international standards.
► Establish a mechanism for investigation of disappearances, as well as a reparations fund for victims of a range of human rights violations.
► Facilitate voluntary return of refugees.

To Syrian opposition groups
► Ensure respect for and act according to international human rights law.

To the U.N. Human Rights Council
► In addition to the "urgent steps" recommendation quoted above, establish a special rapporteur on the situation of human rights in Syria.

To the U.N. High Commissioner for Human Rights
► Establish in Syria an in-the-field protection and promotion mandate.

To U.N. members, particularly those in the Arab League
► Aid various measures recommended above, "and suspend the provision of arms and other military material to all parties".
► Aid Syria to address weaknesses in its judicial and security sectors.
► Give refuge to Syrian asylum seekers -- a recommendation that resonates with Jaya Ramji-Nogales' excellent post yesterday.