Thanks for the vote

Today we American 'Grrls settle into a day of Thanksgiving.
In years past, things were much less settled. Newspaper archives reveal that Thanksgiving once offered a platform for debate about whether American women ought to be allowed to vote. 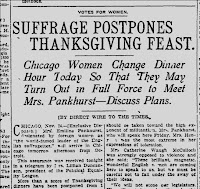 to attack the campaign for women’s right to vote, by attempting to denigrate some of those who support it.

The charge levied against leaders who'd recently taken part in a Woman’s Suffrage Convention at Carnegie Hall? Daring to divorce. The minister told his congregation:

'I do know that there was one woman very conspicuously present upon that platform who had herself changed husbands, so I suppose that there must have been something in her case that might give point to her abjurations; yes, and there was another one there, too, prominently connected with the movement — I mean the eruption — that also belonged to the migratory sisterhood.'

The minister professed not to be painting all suffragists with the same broad, tainted brush:

'I do not mean at all that this agitation is in the interests of what might be called ‘tandem polygamy,’ but our ladies, of the delicacy with which they are supposed to be possessed, and with which, as a rule, they certainly are possessed, should be made thoughtful of facts of this kind.'

A very different note was sounded when the Woman Suffrage Party met in the same month 4 years later at Carnegie Hall. The partied rallied in "thanksgiving for the suffrage victories won in the States in this country and abroad in the last year" -- and raised $7,000 for the cause. The

'I do not believe in war, but I say to you, fellow-citizens,that if the women are going on making their demand and election after election the voters are going against them at the polls, I tell you we will not endure it.'

As posted, by Thanksgiving Day 1920, women had won the franchise.