Where in the world: Saif, Senussi 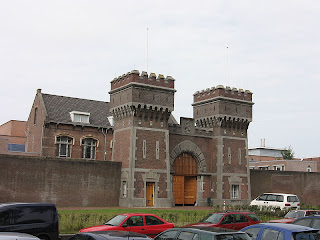 Suddenly a cell in Scheveningen seems to be looking rather nice.
That's the takeaway from the official confirmation that at least 1 of the 2 surviving Libyan accused might like to hand himself over to the International Criminal Court.
He is Saif al-Islam Gaddafi, alleged in an ICC arrest warrant to have been the de facto prime minister to his father, slain Libyan leader Muammar Gaddafi. Readers will recall that a while back he slipped out of custody before the ICC could secure his transfer to its detention center at the Dutch prison above right. (photo credit) Indeed, Gaddafi fils made a triumphal march en limousine to prove his escape to reporters.
But now that the new Libyan government seems eager to lay hands on him, he's angling for a place in the dock of the ICC, as Prosecutor Luis Moreno Ocampo confirmed in a speech to the U.N. Security Council yesterday:

The answers to those questions? Moreno Ocampo continued by reference to the completion-of-sentence provision in the Rome Statute of the ICC:

'We clarified that in accordance with article 107 of the Statute he may request the Judges not to order his return to Libya after his conviction or acquit[t]al but that he be sent to a different country, provided that country has consented to receiving him. Judges can also decide if he may be extradi[t]ed to another State. It is a positive sign that the Court is seen as as a guarantor of the rights of the suspects.'

The last line is telling -- an implicit reminder that the rights of the accused may not yet be entrenched in the new Libyan regime.
That yet become an issue. As Moreno Ocampo acknowledged later in the same speech, "the new Libyan authorities are in the process of preparing a comprehensive strategy to address crimes"; moreover:

'In accordance with the Rome Statute the International Criminal Court should not intervene if there are genuine national proceedings. Should the Libyan authorities decide to prosecute Saif al-Islam Gaddafi and Abdullah al S[e]nussi for the same crimes under investigation by the International Criminal Court, they should submit an admissibility challenge and it will be for the ICC Judges to decide.'

The prospect that even after a suspect arrives in The Hague, the statute's complementarity provisions entitle Libya to litigate its bid for trials at home, may chill any ardor for ICC proceedings. Thus it remains to be seen whether Saif -- or the other accused, former intelligence chief Senussi, incorrectly said to have died the same day as Saif's father -- will come in from wherever in the world they may be hiding.