(Delighted to welcome back alumnae Brigid Inder and Kate Orlovsky, who contribute this guest post)

On 13 December 2011, the Women's Initiatives for Gender Justice launched the Gender Report Card on the International Criminal Court 2011. The launch took place during the tenth session of the International Criminal Court Assembly of States Parties in New York, which IntLawGrrls covered in posts available here.
The Women’s Initiatives for Gender Justice, for which we work, is an international women's human rights organisation that advocates for gender justice through the ICC and through domestic mechanisms; for 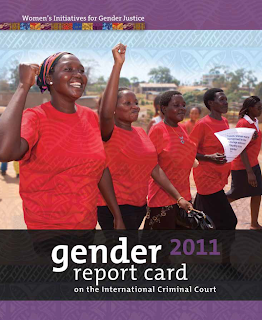 example, through peace negotiations and justice processes, and through working with women most affected by the conflict situations under investigation by the ICC.
We have programmes in Uganda, the Democratic Republic of the Congo, Sudan, the Central African Republic, Kenya, Libya and Kyrgyzstan. With offices in Cairo, Egypt, in Kampala and Kitgum, Uganda, and in The Hague, Netherlands, the Women’s Initiatives is leveraging progress at the international level to advance domestic accountability for gender-based crimes.
The Gender Report launch was attended by representatives of ICC states parties, by officials of the ICC and the United Nations, and by academics, the media, and other members of civil society. Speakers during the event included: ICC Prosecutor-Elect Fatou Bensouda, U.N. Special Representative for Children and Armed Conflict Radhika Coomaraswamy and one of us, the Women’s Initiatives’ Executive Director, Brigid Inder.
Here are some highlights (also see here):
► Bensouda's gave first public address since her 12 December election as next Chief Prosecutor of the ICC ( she published the statement she made on her election day as an IntLawGrrls guest post). In her launch address, which earned notice by the Washington Post, Bensouda pledged to prosecute sexual and gender crimes, saying:

'This office, under my tenure, will continue and will make sure that these crimes that they have suffered will be punished — their perpetrators being arrested and prevented from committing additional crimes … This is a commitment that I make to all of you today.'

Bensouda also stated that in the past the Office of the Prosecutor had not done as well as it could have in working with women’s organisations, and that as Prosecutor she will ensure that her office works more closely with these groups, including local women’s rights organisations in conflict countries, which are often the only ones assisting women victims.
► Coomaraswamy spoke from her experience both as the former Special Rapporteur on Violence against Women and as the current U.N. Special Representative for Children and Armed Conflict. (See posts on our Twitter feed here.) She recalled:

'What frustrated most of us in the 1990s is that the international legal framework had nothing to say about sexual and gender-based crimes. When we think of the ICC, we think of the broad definition of sexual violence, which was unthinkable before the Rome Statute. But, let’s not forget the struggle that went into creating this framework.'

► In her speech, Brigid spoke to the purpose of the Gender Report Card 2011, or GRC, available in pdf here. Brigid stressed:

'Monitoring and critiquing the ICC and production of the GRC is one of our strategies to advocate for gender-inclusive justice and to promote the capacity of the court to address gender issues within the global legal system. It is also one of our strategies for the inclusion and participation of women in shaping international criminal law as law-makers, practitioners, decision-makers, participants and beneficiaries of the justice process.'

This is the seventh annual report card produced by the Women’s Initiatives for Gender Justice. (Previous post; prior editions available here.) This Gender Report Card 2011, which soon will be available at our website, analyses the institutional developments of the ICC throughout 2011, as well the Court’s substantive work and jurisprudence. It also examines the Court’s internal policies, its recruitment and personnel statistics, its institutional development, and the work of its independent bodies, such as the Trust Fund for Victims and the Office of the Public Counsel for Victims. The Gender Report Card 2011 contains detailed recommendations both to the Court and to the ICC Assembly of States Parties. In short, it provides the most comprehensive gender analysis of the ICC currently available.