Criminalization of prostitution as a violation of sex workers’ health rights

My Fordham Law students and I recently returned from a research trip to Cape Town, where we’re working with the Sex Worker Education and Advocacy Task Force (logo at right) and other stakeholders on the campaign to decriminalize sex work in South Africa. We had the opportunity to lead a “creative space” session with a large group of South African sex workers allied with SWEAT, and we asked them how the criminalization of prostitution affects their lives. Among other challenges, they described how criminalization fosters grinding stigma and discrimination that creates barriers to their access to health services. They spoke passionately of their need for “dignified medical treatment.”
As we mark the International Day to End Violence against Sex Workers today (prior post), it’s worth remembering that violence has many faces.
The criminalization of prostitution amounts to structural violence denying sex workers the right to health. Criminalization increases the risk of HIV and sexual transmitted infections for sex workers in South Africa and throughout the world, because it:
► Fuels stigma towards sex workers in the healthcare setting;
► Fosters police abuse of sex workers; and thus
► Ensures the lack of sex worker involvement in the development of health policy decisions that affect them.

Stigmatization
The Global Network of Sex Work Projects rightly notes that access to condoms and safe sex information drives down sex worker rates of HIV and sexually transmitted infections. Criminalization, though, stigmatizes prostitutes as criminals, which negatively affects how health workers view them. This leads to discrimination in healthcare settings that obstructs sex workers’ access to services and information. During our creative space session, one of the South African sex workers noted,

Abuse by police
Criminalization also leads to police abuse that increases sex workers’ vulnerability to health risks.
South African sex workers, in statements that echo accounts of prostitution-related police misconduct in other countries, report that police often confiscate condoms from sex workers to use as evidence of prostitution, and further demand unprotected sex from sex workers who seek to avoid arrest. Constant police harassment discourages some sex workers from attempting to access health services, out of fear that revealing their occupational identity at health clinics will lead to arrest. In addition, HIV-positive sex workers who get caught in the common cycle of arbitrary police arrest and detention are often unable to adhere to anti-retroviral treatment when jailed.

Lack of input
Because of their illegal and stigmatized status, sex workers also rarely have formal input in the formulation of health policy decisions that affect them.
Governments designing HIV/AIDS interventions often neither seek out nor listen to the voices of sex workers. Instead, sex workers’ voices remain silenced, precluding their potentially powerful contribution to state health policy.
This impedes the creation of responsive government health care services for sex workers. Health workers, for instance, need training to know what questions to ask and interventions to employ when assisting members from stigmatized groups, like sex workers. But it’s difficult to fight for such necessary trainings and other specialized responses when the groups who need them are criminalized.

Decriminalization & right to health
The above realities combine to obstruct sex workers’ right to the highest attainable standard of health, a right enshrined in many international instruments including the Universal Declaration of Human Rights and the International Covenant on Economic, Social, and Cultural Rights. In light of these abuses, a 2010 report by Anand Grover, the Special Rapporteur on the Right to Health, argued:

'Decriminalization, along with the institution of appropriate occupational health, and safety regulations, safeguards the rights of sex workers.'

Similarly, a 2010 report by UNAIDS embraced decriminalization as a matter of good public health policy. And this past October Festus Mogae, the former president of Botswana and current head of his country's National AIDS Council, became the first high-level African politician to call for decriminalization of prostitution.
Despite a stifling legal environment, groups like SWEAT are heroically doing their part to ensure that sex workers have access to safe sex and other health information and services.
E 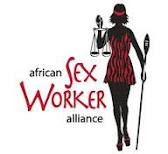 very night, peer educators and paralegals from SWEAT and the sex-worker-led Sisonke movement pile into a van and travel to areas frequented by sex workers, dispensing free condoms, health information, and legal advice. (credit for Sisonke image at right) While in South Africa, I had the opportunity to tag along during one of their nightly health and legal outreach efforts. As sex workers entered the large SWEAT van, I was struck by how the SWEAT and Sisonke peer educators and paralegals, themselves former and current sex workers, gently, reassuringly, and intently listened to the young women narrate stories of police harassment. They asked the young women what they needed, offered legal advice and assistance, and handed them health pamphlets and free boxes of condoms. They treated the sex workers with dignity – a right intricately tied to the right to health.
It’s time for governments to do the same by ending structural violence in the form of criminalization laws and enforcement practices that deny sex workers the right to health.